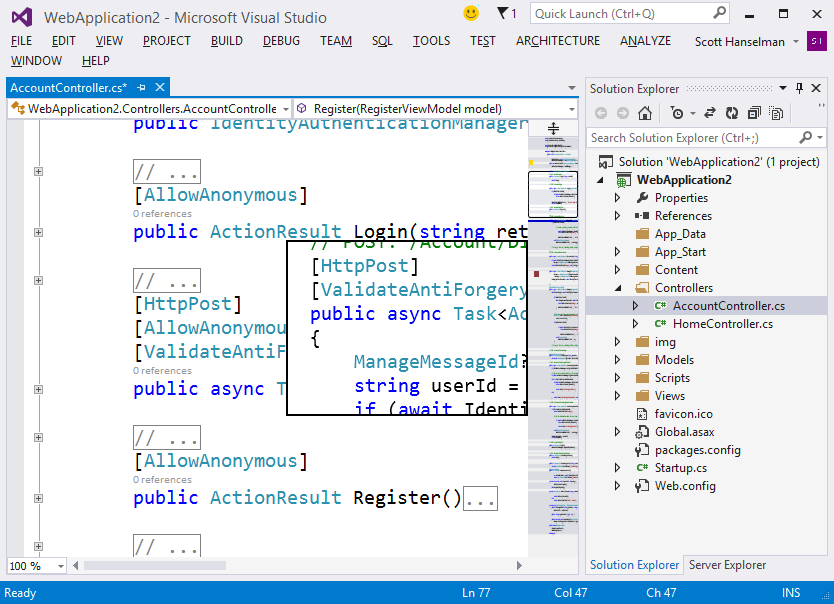 Microsoft has released the final version of Visual Studio 2013 Update 3 and Team Foundation Server Update 3, with a veritable laundry list of new features and added support.

The release was announced in tandem with blog posts from Microsoft Developer Division corporate vice presidents S. Somasegar and Brian Harry. One of the biggest new features is CodeLens support for Git repositories, enabling indicators for authors and code changes. Developers can also view the work items associated with a method, property or class, which are updated when there is a new user commit, a pull or fetch request, or a branch change.

Some of the other major additions in Update 3 are:
• DevOps release management: Integrates with Windows PowerShell and mobile services to increase developer productivity in maintaining and deploying their applications.
• Azure tooling: New Windows Azure Notification Hubs allow developers to send mobile push notifications to Windows Store or Phone apps from .NET Mobile Services as well as JavaScript-based Mobile Services.
• Performance and diagnostics enhancements: Added features include multi-monitor app support, managed code memory dump, updated CPU and Memory Usage tools, customizable test plans and test suites, and a new set of application insights tools.
• Application Insights tools for Visual Studio: Thesehave become “in the box” features in Update 3, enabling developers to easily access data about how apps are performing for users, diagnose any issue, and ensure service is available and responsive.
• CodeLens support for Git repositories (for Visual Studio Ultimate users): This provides CodeLens indicators for authors and changes to your code, when the Git repository is pulled or fetched, or when the branch is changed.
• Option to eliminate ALL CAPS in Visual Studio 2013 menu bars: Developers can choose whether to display Visual Studio menu bars in all caps or in title case. This option automatically roams to all signed-in devices.
• New Code Maps features: Code Maps links are now styled with colors. Drag-and-drop binaries allow creation of new directed graphs by dragging binaries from File Explorer.

Visual Studio 2013 Update 3 also comes with a variety of improvements for ASP.NET, including support for MVC 5.2, Web API 2.2, the ASP.NET Identity sign-in manager, Entity Framework 6.1.1, improvements to the JSON and CSS editors, and IntelliSense support for RequireJS modules to improve HTML and JavaScript development. As for some of the other new ASP.NET features and support, Update 3 adds:
• ASP.NET scaffolding: Scaffolding is a code-generation framework for ASP.NET Web applications. Visual Studio 2013 includes code generators for MVC and Web API projects.
• Microsoft Azure WebJobs support: Developers can now add standard console projects to Visual Studio solutions and publish them to Azure Websites as either continuous, triggered or scheduled WebJobs.
• Support for Windows Azure Active Directory: Developers can create ASP.NET projects using WAAD when signing in with Live ID.

The update also ships in tandem with the latest Microsoft Azure SDK, including new virtual machine, storage and multi-device hybrid app support. According to Harry, Microsoft is already working on Visual Studio 2013 Update 4, which is set to ship its first CTP with improvements to TFS Agile planning tools.