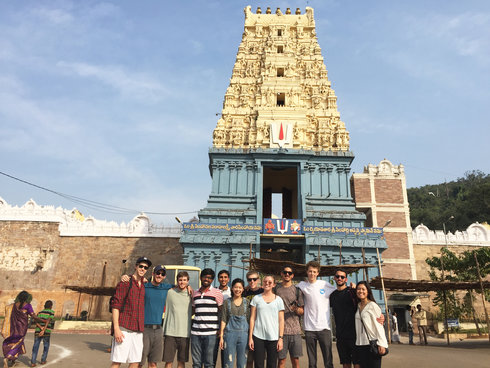 Everything about Solomon Darwin’s work as director of the University of California, Berkeley’s Garwood Center for Corporate Innovation flies in the face of the idea of traditional education. That’s for the other schools at Berkeley. Darwin’s Garwood Center, on the other hand, is about students being thrown to the metaphorical wolves of global business reality.

We spoke to Darwin in September, when he was just gearing up to send a new batch of Berkeley’s brightest overseas to spend five days rapidly pitching software projects to a bevy of Indian governmental officials.

The overall plan comes from India’s goal of rebuilding 100 cities as, for lack of a better term, cities of the future. This grand plan includes Fortune 100 companies from around the globe, and also extends to the UC Berkeley campus. There, students were charged with forming teams, preparing a software product pitch, and eventually flying to India.

For the fall semester of 2015, students were charged with helping the city of Visakhapatnam, India. Vizag, as it’s called, is the largest city in the Indian state of Andhra Pradesh, and sits on the country’s central eastern coast.

Kaitlen Nguyen, a media studies major from Los Angeles on track for a career in public relations, said that she learned how to talk to an engineer during the course of the project. “I got ‘speed-dated’ into the class,” said Nguyen, referring to the method by which teams were formed. “Engineers get priority, they are scarce. The first two weeks we speed-dated the engineers and gave them a 30-second pitch for why we’d be useful. Speed-dating an engineer is really hard.”

Nguyen and her other non-engineering teammates (assigned with addressing safety and security) went through a sort of engineer diplomacy class as well. That’s where, she said, she learned never to ask an engineer, “Can’t you just…?” questions.

Rosaura Serrato is a business major from Salinas, Calif., and her entertainment and education-focused team was tasked with helping students in Indian colleges. “At first we wanted to do some kind of Facebook for students to help each other with classes,” she said. “There’s a lot of corruption in education in India, and it’s focused on how much can you memorize.”

No matter their original ideas, however, all the teams had to quickly change their plans and, essentially, start over when they started receiving feedback in India from government officials.

Said Serrato: “The main lesson I took away is that there isn’t a right or wrong way to do business. It’s a combination of everything: dealing with different people, and getting six different perspectives in a group. It’s about being project manager and how you make that work. In India, it was about being open-minded. We didn’t want to be taken as American students wanting to tell them how to do this. I loved the hospitality of Indian people. I felt so welcome.”

Rolling with the punches
Ted Xiao, the engineer on Nguyen’s safety team, felt that the criticism in India was a bit more than some students were prepared for. As an electrical and computing science major from Davis, Calif., he was one of the lucky developers with the power to choose a team during the speed-dating round.

“In the States, our cultural education is that we’ll give you 90% praise and a tiny bit of criticism,” he said. “In India, it was a short compliment, then 20 minutes of criticism.”

The old adage goes, no plan survives first contact with the enemy. In the end, Xiao’s team built four prototypes over the course of the fall semester, and he got to call all of the technology shots.

“We’d get to decide if there was a value-add,” said Xiao, describing the experience of being the gatekeeper for the entire project. “That was foreign to me. It was empowering. A lot of our business team members would say, ‘Can you do this?’ And I’d say yes or no. I was able to promote a lot of the features I was going to have to implement.”

As for the technology used, Xiao is truly a millennial coder. “We used Continuous Integration because we were doing Continuous Deployment. There weren’t really milestones,” he said. “I decided to experiment. I used Meteor.js for the first time. I am a Rails guy, but switching to Meteor wasn’t a huge change. I was surprised by how similar they were. We pivoted so many times, I had to be fast. It was fun learning a new stack.”

In the end, Xiao’s team produced a mobile application to map crime, giving both the police and citizens a way to report incidents and keep track of where bad things are happening in their town.

Getting to that point, however, meant being grilled and cajoled as if these students were on “Shark Tank,” sometimes with multiple pitches and pivots in a single week. Nguyen appreciated just how much work this meant for Xiao.

“The great thing about Ted is he’s good about dumbing it down,” said Nguyen. “I got to understand all the things that were happening. We worked side by side a lot. I’ve seen him throwaway hours of code and change features. I’ve seen the interface change from one day to the next. He’s great at keeping me in the loop.”

The biggest lesson these two learned? Choosing your team matters a great deal. Other groups in the Berkeley program were not blessed with as much interpersonal cohesion, according to Serrato. Perhaps the biggest lesson some of these students learned in India was about the importance of having a good team dynamic.