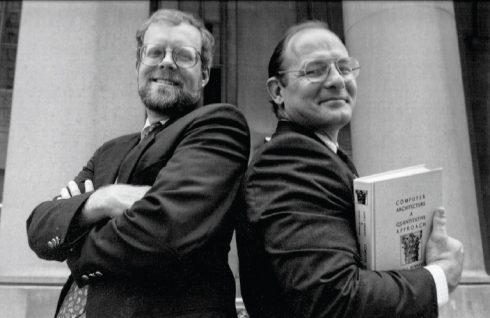 ACM, the Association for Computing Machinery, has named John L. Hennessy and David A. Patterson the recipients of the 2017 ACM A.M. Turing Award for inventing the reduced instruction set computer (RISC) approach.

Hennessy and Patterson developed a systematic and quantitative approach to designing faster, lower power, and RISC microprocessors. The approach has led to lasting principles that architects have used for many projects in academia and industry. Today, 99% of the 16 billion microprocessors are RISC processors, and are found in nearly all smartphones, tablets, and embedded devices that comprise the Internet of Things (IoT).

“Dave and I were motivated by the limitations of how big of a computer you can put on a single chip,” Hennessy, former president of Stanford University from 2000-2016, told SD Times in an interview. “Now, 35 years later, similarities face computer designers due to the rise of IoT and an increase attention to energy consumption. The technology that we invented has a new relevance to developers. What is amazing is that no technology has lasted that long. It is an exciting thing for us.”

“Even though we grew up on the opposite coast, we had similar identical worldviews which made it a wonderful collaboration,” Patterson told SD Times. “Our goal was to learn how to develop and measure innovation. I am thrilled to share the award with my long time collaborator and friend.”

“ACM initiated the Turing Award in 1966 to recognize contributions of lasting and major technical importance to the computing field,” said ACM President Vicki L. Hanson. “The work of Hennessy and Patterson certainly exemplifies this standard. Their contributions to energy-efficient RISC-based processors have helped make possible the mobile and IoT revolutions. At the same time, their seminal textbook has advanced the pace of innovation across the industry over the past 25 years by influencing generations of engineers and computer designers.”

The RISC approach was coined by Patterson, a professor of computer science at Berkeley from 1976-2016, and his team in 1982. It differed from the complex instruction set computer (CISC) computers because it required only a small set of simple and general instructions, reduced the workload, and required fewer transistors. That year, Patterson’s team built and demonstrated their RISC-1 processor. The prototype, with 44,000 transistors, outperformed a conventional CISC design that used 100,000 transistors.

Their work was commercialized by Sun Microsystems in its SPARC microarchitecture. In 1984, Hennessy co-founded MIPS Computer Systems Inc. to commercialize the Stanford team’s work. Sun and MIPS Computer Systems Inc would find success that led to a wider acceptance of RISC microprocessors in the mid 1990’s. This also led to their groundbreaking textbook, Computer Architecture: a Quantitative Approach. The textbook, released in 1990, was the first text to provide an analytic and scientific framework for engineers and designers to evaluate the net value of microprocessor design. This resulted in a shift from seeking raw performance to designing architectures that take into account issues including energy usage, heat dissipation, and off-chip communication. The textbook has influenced generations of engineers.

“John and I were dissatisfied with textbooks of the 1980’s because it was hard to design a good computer,” said Patterson. “At the time, we were writing the textbook for academic purposes but it started to become more popular with industries as well.”

Awarded since 1966, the A.M. Turing Award is the ACM’s most prestigious technical award that is given for major contributions of lasting importance to computing. The award is named for Alan M. Turing, the British mathematician that articulated the mathematical foundation and limits of computing. He was an important contributor to the Allied cryptanalysis of the Enigma cipher during World War II. Referred as the “Nobel Prize of Computing,” the award carries a $1 million prize, with financial support provided by Google, Inc.

The recipients will receive the award at the ACM’s annual awards banquet on Saturday, June 23, 2018 in San Francisco, California.

John L. Hennessy was the president of Stanford University from 2000-2016, and affiliated with the university for over four decades. He is currently the Chairman of the Board of Alphabet Inc. and Director of the Knight-Hennessy Scholars Program at Stanford. Also, he is a fellow of ACM and Institute of Electrical and Electronics Engineers (IEEE). His honors include IEEE Medal of Honor, the ACM IEEE CS Eckert-Mauchly Award (with Patterson), the IEEE John von Neumann Medal (with Patterson), the Seymour Cray Computer Engineering Award, and the Founders Award from the American Academy of Arts and Sciences.

David A. Patterson was professor of Computer Science at the University of California-Berkeley from 1976-2016. Patterson was also elected to the National Academy of Engineering and the National Academy of Sciences. He is currently an engineer at Google and serves as vice chair of the board of the RISC-V Foundation, which offers open free instruction set architecture in order to enable processor innovation through open standard collaboration. He is also a fellow of ACM, IEEE, and the American Association for the Advancement of Science (AAAS). His honors include IEEE Medal of Honor, the ACM IEEE CS Eckert-Mauchly Award (with Hennessy), the IEEE John von Neumann Medal (with Hennessy), the Richard A. Tapia Award for Scientific Scholarship, Civic Science, and Diversifying Computing, and the ACM Karl V. Karlstrom Outstanding Educator Award.