Latest News
Published: July 8th, 2014
- Aaron.frerichs
Blackberry: It’s hip to be square
Blackberry’s upcoming smartphone, Blackberry Passport, will feature a square-shaped design and while many people have been scratching their heads about the unique form, Blackberry says “It’s hip to be square.”
“There’s a marriage of form and function with a rhyme and reason to it,” the company wrote on their blog.
Blackberry states that while the rectangle is the de facto approach to smartphone designs, it limits innovations. The Passport features a 4.5-inch square screen that, according to Blackberry, provides a better viewing experience and more characters per line when it comes to reading e-books, documents and mobile sites. –Christina Mulligan

Python is the most popular introductory teaching language at U.S. universities 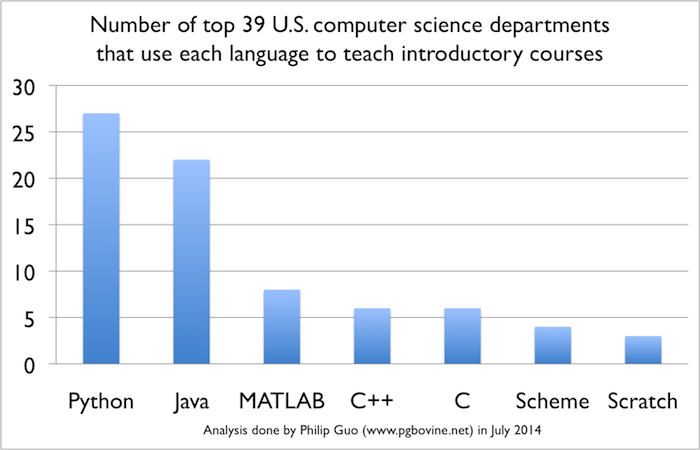 According to a report from the Association for Computing Machinery, Python is now the most popular introductory teaching language in the top U.S. computer science programs.

The report states that eight of the top CS department and 27 of the top 39 teach Python in introductory computer science courses. The top 39 university computer science departments were taken from the 2014 U.S. News and World Report rankings.
After Python, the most popular languages taught in introductory computer science classes were Java, MATLAB and C++ –Rob Marvin
Microsoft opens developer sign-ups for Windows on Devices
Microsoft has opened developer registration for Windows on Devices, its SDK for the Internet of Things.
The SDK incorporates hardware such as the Intel Galileo board allowing the software to read temperature sensors, blink LED lights, power robot servers and more. The first Windows on Devices SDK was announced this past spring, but the sign-ups will give developers their first look at the incomplete prerelease and API surface, along with samples and documentation of Windows on Devices apps.
Sign up for the Windows on Devices SDK here. –Rob Marvin
Clang/LLVM updates Windows support for building native programs with Visual C++
The Clang/LLVM Compiler Infrastructure Project has released a major Windows Update, adding support for building native Windows programs compatible with Visual C++.
Google software engineer and C++ (Clang/LLVM) team member Warren Hunt announced the update in a blog post. Clang-cl layout is not compatible with VS2013 and supports all calling conventions used up to VS2012. Another compatibility issue resolved in the release is passing C++ objects by value on 32-bit x86 processors.
For more information, check out the Clang 3.5 documentation. –Rob Marvin

View all posts by aaron.frerichs