Weave creates a network bridge on each host, connecting each container to the bridge via a veth pair (a pair of virtual network interfaces connected together). Weave routers then capture Ethernet packets from a bridge-connected interface and establish TCP connections that can traverse firewalls.

The technology allows the creation of run-anywhere applications with multiple containers, and works alongside Docker’s existing host.

More information can be found at Weave’s GitHub repository.

“The revelations about the U.S. government’s surveillance programs that began in June of 2013 have led to an erosion of public trust in the U.S. government and the U.S. technology sector,” wrote the coalition, consisting of the Software Alliance, the Computer and Communications Industry Association, the Information Technology Industry Council, Reform Government Surveillance, and the Software and Information Industry Association in a joint letter. “In an effort to begin restoring that trust, the USA FREEDOM Act will prevent the bulk of collection of Internet metadata, call detail records, and other tangible things in a manner that both enhances privacy and protects national security.”

The coalition also stated that the NSA surveillance program revelations have had a negative economic impact in overseas markets for U.S. technology companies.

The full letter is available here.

Since the start of the Tiobe Index in 2001, second-ranked Java and fourth-ranked C++ have never hit lower ratings (14.14% and 4.674%, respectively) based on the Tiobe formula analyzing language searches across a variety of sites. The report suggested this may be due in part to the widening scope of programming languages, as languages such as Objective-C, C# and BASIC climbed the September rankings.

“This doesn’t necessarily mean that Java and C++ are on their way out,” the report stated. “There is still a huge demand for these programming languages.” 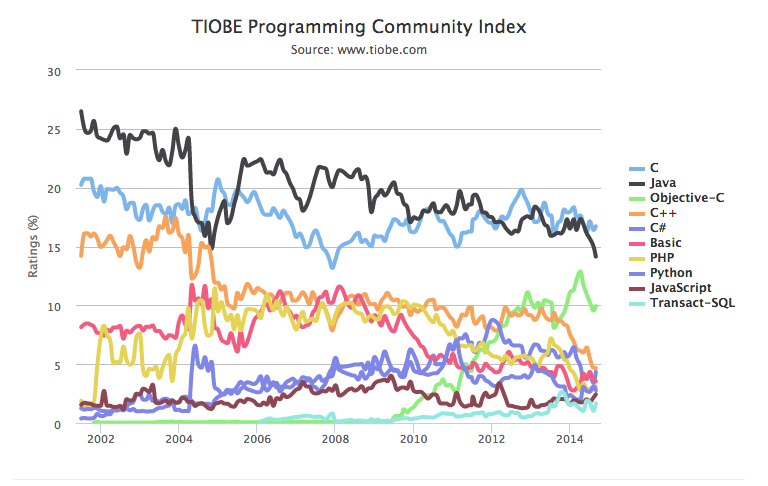 The full Tiobe Index report for September is available here.

DARPA has announced a new program called STAC, or Space/Time Analysis for Cybersecurity, to develop sophisticated code that identifies complex software algorithm vulnerabilities, particularly in Java. The program will focus on addressing misuse of space and time resources that open the door for complex algorithmic attacks.

More information can be found on STAC’s DARPA page.