Will code for food: How databases are changing food delivery 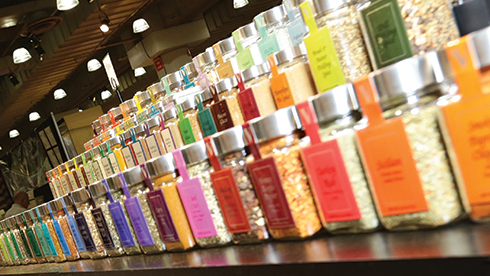 For the food industry, a rude awakening has been taking place. Chipotle, the burrito-heavy fast food chain, has experienced repeated E Coli outbreaks from tainted products in its supply chain. In an industry often still tied to pen and paper, tracing the sources for tainted products can be a nightmare. That’s where software comes in.

At the annual Fancy Foods Show in San Francisco this past January, food producers from around the world were handing out free samples and striking deals with large distributors. And the use of software in these businesses is as varied as the foods they create.

The Wisconsin Milk Marketing Board, for example, software developers to help with analytics, websites, marketing and general operations. The same is true for the California Milk Advisory Board, which also has a distinct cheese bent.

Smaller cheesers, however, are often still using telephones and paper pads to manage operations. Elyzabeth Dehapiot, marketing and brand manager for Marin French Cheese, said that its orders are still fulfilled through a phone call, not an API.

The same is true of Briannas Fine Salad Dressings. Jeffrey Sadler, sales director at Briannas, said that the company is still using traditional business techniques, and does not even employ an in-house software developer.

For these mid-sized food companies, Trevor Morris offers software solutions. He is CEO of Edible Software, a firm that specializes in software for the food industry. Edible was founded 35 years ago, and has since focused entirely on being the software solution for perishable goods companies. And recently, Edible added support for flowers, branching out from only edible items.

Making food is not just about buying the cheapest produce and putting them in a box, said Morris. “We’re tracking cost, where it came from, where it went to; even to the point where we can determine where it went to and where it came from through multiple processes. We have companies that will receive pineapples, for example. They then take those pineapples and do a repack into pineapple chunks. They can assign a cost to it for the labor and machinery. Maybe it’s US$10 a case, but when cut into pineapple chunks, it’s $11 a case,” he said.

Morris’ team develops largely with Microsoft technologies. “We’re using Microsoft’s Web API to open up our API to the Web,” he said. “We’ve been using [the Ionic framework] for our front end. We’ve started down adopting Ionic as well. Technology is moving so quickly; rather than spending the time retooling, it’s easier having the frameworks.”

As for the rest of the stack, Marc Means, senior software engineer at Edible Software, said the team uses a lot of Atlassian tools. “We do source control through Bitbucket, agile processing with JIRA, and its agile plug-ins,” he said. “We use Visual Studio, which is where we’re doing a large part of our .NET development. We use Visual Studio Code to do front-end development.”

All the software in the world isn’t going to win a sale when the buyer is committed to pencil and paper as its solution, however. Morris said he was actually in a meeting in January with a food company owned by the same family for three generations that had to be sold on using his software; he was competing against pencil and paper.

Yes, but is it kosher?
Morris said that, among the many things Edible Software can track through a manufacturing process, kosher is one of them.

And the software of kosher does not end with Edible Software. The Orthodox Union is the world’s largest kosher organization, and it certifies more than 8,000 facilities in more than 80 countries worldwide.

As a large certification body, software has become an indispensible tool for keeping manufacturers up to date and in compliance. But it wasn’t always this way.

Rabbi Moshe Elefant, COO of the Orthodox Union’s Kashruth Department (responsible for kosher verification), said that the push to bring software into the kosher process was a long and difficult one, taking more than 25 years. “As is common in software, we have had some disappointments. We’ve attempted to build the software with different software vendors, and did not succeed. We lost money. What makes this particularly unique is that if a bank needs software, there are many programs for banks,” he said.

Prior to the past decade, however, Elefant said there were some failures. “There are no kosher agencies the scope of ours, so there’s nothing out there we could just buy off the shelf and try to adapt to our application,” he said. “We really were working from nowhere, and actually the people who are the users are Rabbis primarily. I am the person who the IT department reports to. I am not a software programmer, but I know what I want. But I don’t know how to build it. Over the last five to 10 years, we turned a corner.”

Elefant said that the big change came when the Orthodox Union hired some in-house developers and brought its existing knowledge base to bear on the problem. The secret, he said, was bringing in developers who understood what kosher meant.

“It’s not cousins and nephews, but it’s pretty close,” said Elefant. “The head of the team is a religious Jew who lives in the community of our CEO, who has a lot of years of experience in IT management. What we actually did in terms of analysts, the people doing our specification writing and our testing, are not people who have software background. They were individuals who worked in our business and we promoted them to that position, and they have done superbly. We’ve learned you need to write the specifications properly. Many times, there’s a disconnect between the users and people telling the developers what they should do. You have people who’ve had experience doing what we want the system to do. They’re much better qualified to communicate that to the developers.”

Despite being a religious organization rooted in traditions thousands of years old, the Orthodox Union is sometimes the most technologically savvy group in the room when dealing with food producers.

“It all comes from years of experience, and years of failure,” said Elefant. “We don’t roll out anything until it works and we get buy-in from users. We certify thousands of facilities. The range of sophistication that we encounter is from zero to 100. We certify mom-and-pop shops that may not even have a computer. The companies that are extremely sophisticated are demanding we be very sophisticated too, so our range of interface with clients and their level of sophistication is extreme. Some companies still do everything on paper. Some won’t even look at a piece of paper.”