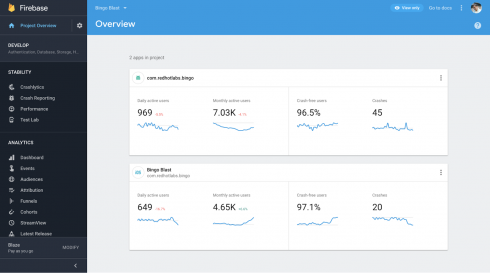 Firebase’s development platform will receive a series of updates focused on tightening the integration of Firebase services and incorporating more machine learning technology into the toolkit, the Google-owned company announced today at the Firebase Dev Summit in Amsterdam.

Firebase is a mobile platform for developing high-quality applications.

The first notable update is the integration of Crashlytics by Fabric, which Google acquired in January. Crashlytics enables uses to track, prioritize, and fix stability issues within applications in real time. The integration will be rolled out over the next couple of weeks.

The company also announced that the overall UI and console appearance are receiving a major overhaul. “All of the products that you’re used to seeing in the Firebase console are still there; we’ve simply reorganized things to more accurately reflect the way your team works,” Francis Ma, group product manager for Firebase, wrote in a post. The features will also be integrated over the coming weeks.

In addition, the Firebase team announced a new A/B testing framework, based on the Google Optimize machine learning-assisted analytics tool. “Setting up an A/B test is quick and simple,” Ma wrote. “You can create an experiment with Remote Config or FCM, define different variant values and population sizes to test on, then set the experiment goal. From there, Firebase will take care of the rest, automatically running the experiment then letting you know when a winner towards your goal is determined with statistical significance.” The A/B testing feature is available as a beta feature today.

Finally, Google introduced Firebase Predictions, which uses machine learning to measure analytics and group users based on predicted behavior. The default groups are:

In addition, users can set up custom groupings based on preferred data.

“While we’re excited about the updates to Firebase that we’ve announced today, we also know that there’s a lot more work to be done. We are working hard to prepare for the General Data Protection Regulation (GDPR) across Firebase and we’re committed to helping you succeed under it. Offering a data processing agreement where appropriate is one important step we’re taking to make sure that Firebase works for you, no matter how large your business or where your users are. We’ll also be publishing tools and documentation to help developers ensure they are compliant,” Ma wrote.