Report: Perl is one of the top disliked programming languages 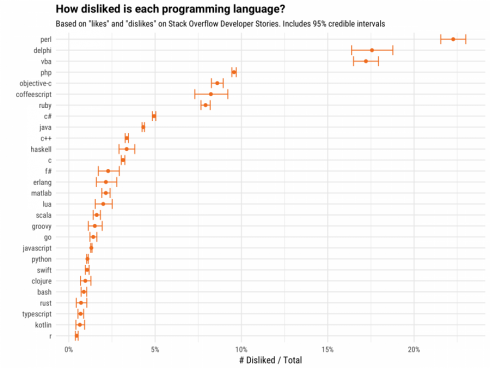 The data comes from Stack Overflow Jobs Developer story data where developers have added tags on the type of technologies and languages they do and do not want to work with. “As a measure of how polarizing each tag is, we’ll look at what fraction of the time it appears in someone’s Disliked tags compared to how often it appears in either someone’s Liked or Disliked tags. Thus, 50% would mean a tag was disliked exactly as often as it was liked, while 1% means there were 99 people who liked it for each one who disliked it,” David Robinson, data scientist at Stack Overflow, wrote in a post.

“It’s worth emphasizing again that this is no indictment of the technologies, their quality, or their popularity. It is simply a measurement of what technologies stir up strong negative feelings in at least a subset of developers who feel comfortable sharing this publicly,” Robinson wrote.

In addition, the data looked at type technology rivalries in the industry. “This highlights some of the “rivalries” underlying the software ecosystem: Linux and OSX vs Windows, Git vs SVN, vim vs emacs and (unsurprisingly to me) R vs SAS. Most of these pairs don’t represent ‘opposite’ technologies, but instead reflect two approaches to similar problems,” Robinson wrote.