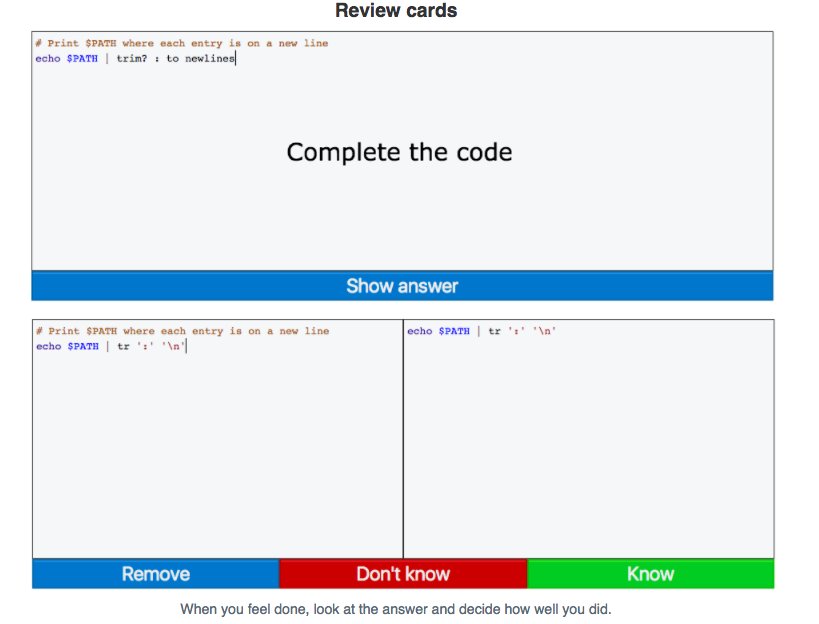 Developers looking to retain their programming knowledge with minimal effort can use a new project called Code Cards, which uses spaced repetition.

Programmers can memorize information or learn something new with Code Cards’ flashcard-like learning site. They can take something new that they learned and turn it into a minimal example. Then they can “add a card where the question has all the boilerplate there, but leaves out the interesting part,” said Oskar Thorén, founder and maker of Code Cards.

To fill in the answer on the card, the programmer can just put the whole minimal example in. When reviewing, the programmer will be presented with a question, which they have to complete in the editor.

“As you add more cards, they’ll be scheduled at different intervals depending on how well you know them, but you just have to worry about regularly reviewing (we send reminder e-mails) your cards,” said Thorén.

The idea for Code Cards came from Thorén’s own experience as a programmer. He found that when he is coding in a language or environment he isn’t used to, there are moments when he has to look things up or solve problems in a “less proper way,” he said.

“I’ve noticed a lot of the great programmers I work with just seem to have a lot of this knowledge already at their fingertips, which I think is really neat and helps you maintain flow while coding,” said Thorén. “I’ve been using spaced repetition systems for a long time and figured it made sense to combine the two. I tried using existing programs such as Anki to do this, but it didn’t feel like the right fit for the problem.”

Anki is a popular flashcard program that uses spaced repetition, like Code Cards. Spaced repetition, according to Thorén, takes advantage of how a human’s memory works. He first experimented with spaced repetition when he became curious about the possibility of retaining technical skills. He explained that a spaced repetition system efficiently repeats things you don’t want to forget, usually by practicing with electronic flashcards.

“In my experience, spaced repetition is most effective when you already understand something and are simply trying to retain that knowledge—getting the understanding into your muscle memory, so to speak,” said Thorén.

Developers can review examples of programming flashcards here and create or add their own cards by visiting Code Cards’ site.