Hour of Code kicks off its third year 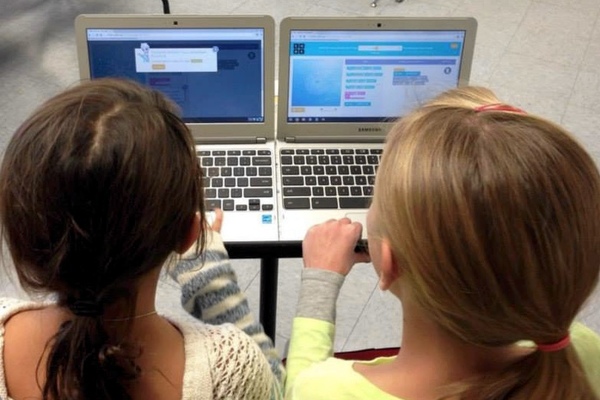 The third annual Computer Science Education Week (CSEW) kicks off this week, with an emphasis on bringing more women and minorities into programming. Code.org started CSEW in 2013, including the Hour of Code campaign, an initiative to get more talented and creative people interested in computer science in just one hour.

Non-profits, schools and experts in code and programming are all participating this week to give every student the opportunity to learn computer science, since only one in four schools teach the subject, according to Code.org. With one-hour tutorials all week long, it’s designed to demystify code and show that anyone can learn the basics.

(Related: Code.org partners with College Board for nationwide CS education)

There are a variety of tutorials and projects happening this week, and below is just a glimpse at what this event has to offer students and teachers.

Apple stores around the world are supporting Code.org and participating in CSEW by hosting workshops and other events for kids ages 6 and up. Developers and organizations that support computer science education will be appearing at the stores, and some of these events will be available on iTunes as podcasts.

Today there is a special event in the Apple Store in Soho, New York. Starting at 6 pm, Hadi Partovi, cofounder and CEO of Code.org, will discuss the need for computer science education across the world. He will also talk about the 100 million students who have found success from Hour of Code.

The rest of the week, other speakers in major cities will talk about the importance of code. Tomorrow in San Francisco, cofounder, and CEO of codeSpark Grant Hosford will share how his young daughters inspired codeSpark’s game The Foos. On Saturday, in Chicago, Danny Yaroslavski, founder and CEO of Lightbot, will talk about the fundamentals of coding and how children of all ages can learn for themselves. A full list of speakers and the Apple stores they can be found at are on this website.

Khan Academy, a non-profit educational organization, is joining Hour of Code as a way to introduce JavaScript. This tutorial is for middle schoolers and older, and supports modern browsers. Kids can learn the basics of JavaScript programming while creating drawings with code.

Kids can get started by watching an interactive “talkthrough,” where code experts will write code and talk through what they are doing while students watch. At the same time, students can edit the code that the expert just wrote to see what happens when they change it. There are also coding challenges where students can earn points using what they learned to complete their drawing, and be able to practice new techniques of coding. This tutorial is part of the “Beyond an Hour” of code.

Minecraft is teaching the basics of computer science by showing Hour of Code participants how to program characters named Alex or Steve to move through a simulated piece of a Minecraft world. Jens Bergensten, the lead developer on Minecraft, said that traditional programming is usually in text. But with his tutorial, students will use Blockly, a system that uses visual blocks that a kid can drag and drop to write programs. Basically, the child is creating JavaScript code.

Sauce Labs provides a cloud-based platform for automated testing of Web and mobile applications. Using Sauce, Code.org will be able to do a manual testing process to run hundreds of tests parallel each day against multiple browsers, OSes and platforms. This will allow Code.org to focus on expanding the diversity of the event.

With Sauce, Code.org can encourage more people to contribute to the codebase because of the test infrastructure in place. Before, they had to almost “gate” the number of people who could contribute, and now they have expanded the amount of contributors, according to Bill McGee, director of marketing for Sauce Labs.

He added Sauce Labs also recognizes that software and technology touches everything, and the company wants help as many open-source projects as they can. He said his company has never helped with a large initiative like Hour of Code before.

Sauce Labs employees will also be going into classrooms in the Bay Area during Hour of Code to talk to students about what got them interested in software or technology.

To connect with the upcoming release of the new Star Wars movie, kids can learn to program droids and build a galaxy with code. They can work with BB-8, a spherical droid that is controlled by software. In the Star Wars Hour of Code, kids can build their own Star Wars game that will teach them the basic concepts of programming. Programming is normally in text, but these students will use blocks similar to Minecraft’s Blockly.

Thinkersmith, a non-profit computer science education organization, provides schools or individuals without access to devices or Internet an “unplugged” activity for them so they can still participate in the Hour of Code. It calls this lesson “My Robotic Friends.”

This Hour of Code teaches children programming without computers. It uses a predefined “robot vocabulary,” which students use to figure out how to guide each other to accomplish specific tasks without discussing them first. The lesson teaches children about the connection between symbols and actions as well as the skill of debugging. It’s an activity for groups of all ages.