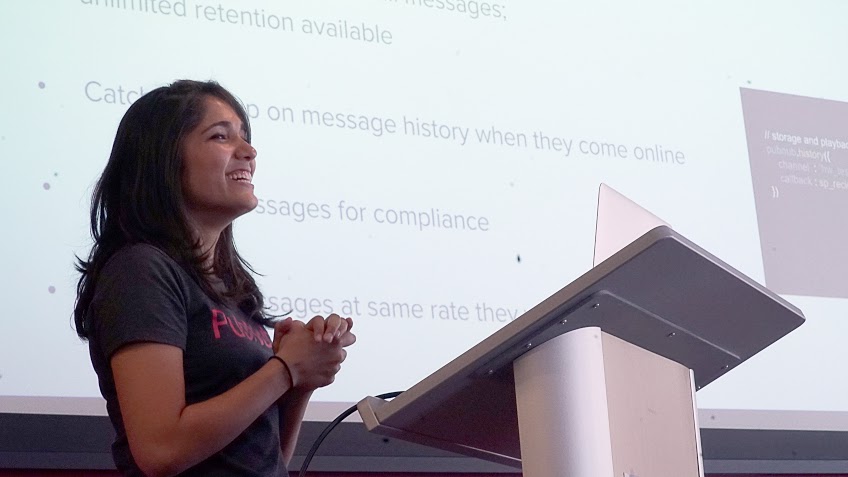 If there’s one thing that really turns people away from a product or service, it’s a hard sales pitch. Developers are no exception. When hearing company pitches about tools or solutions that might be useful to their team, developers in today’s world want to see the code and learn the real value of the product—marketing jargon aside.

Developer evangelism isn’t a new term. Companies have been hiring developer evangelists for years to bridge the gap between the company and the developers or customers trying to use the product or tool, gaining their trust and building their own credibility. While the role of developer evangelist takes many forms, simply put, their job is to communicate information as honestly and technically (or non-technically) as possible.

The concept has been around since companies like Apple and Microsoft started hiring developers who understood and then communicated what their technology did clearly to other developers, according to Bhavana Srinivas, a technology evangelist at PubNub. PubNub is a global data stream network and API that allows its customers to manage real-time applications and IoT devices. The company currently has three evangelists, she said.

Marinacci also discussed other notable members that have led the way for developer evangelism. Guy Kawasaki, one of the Apple employees responsible for marketing the Macintosh computer in 1984, is known for popularizing the use of the word “evangelist” to describe his approach to marketing.

Why were these men considered early forms of developer evangelists? It’s because they weren’t evangelizing a product; they were promoting and educating people about a technology, said Marinacci.

Today, developer evangelism sometimes sits under marketing or engineering, and sometimes it’s a team of its own. IBM Cloudant, a globally distributed data layer for Web and mobile apps, has 17 “advocates,” but their roles are the same in that they help focus on adoption and outreach, not just lead generation, said developer advocate at IBM Bradley Holt.

“For us, there’s a bigger picture,” he said. “There’s that two-way street; it gives us independence of being able to really focus on the needs of the developer.”

At Red Hat, a provider of open-source solutions, developer evangelists are divided into three categories: developer advocacy, where they reach out to developers in the community; technology evangelists, who are focused on customers and getting them to effectively use Red Hat’s products; and open-source evangelists, who focus on the culture of open source.

“All companies that have an open-source strategy and are building some type of open source or integrating open source may need evangelism,” said Thomas Qvarnström, JBoss technical evangelist at Red Hat. “But I definitely think that if you want to have an active community, you need evangelism on some level.”

A way for developers to grow
Matt Makai is an experienced developer. But after eight years of writing code, he started thinking about the next step in his career.

He said the options were to go into management, or become a technical architect—neither of which are as technical as the role of a developer. That’s when he discovered developer evangelism, where he could become a code-savvy and well-versed spokesperson for a company.

Instead of delivering the flowery marketing bullet points that developers hate to hear, Makai could get down on their level, show them the code, and demonstrate in five minutes why a tool or solution would be useful to them.

Now a developer evangelist for Twilio (a cloud computing platform for developers), his days are a little different than when he was solely a developer. In addition to the technical blog posts he writes and the conferences or hackathons he attends, he is also spending a lot of time still coding.

“You live and die in the software community by your technical credibility, and you only get technical credibility by being hands-on in the code, pretty much daily,” said Makai. “I would say I spend 40 to 45 hours a week coding—not all that is for Twilio. Some is side projects or things I’m working on to learn.”

Unlike Makai, Srinivas became a developer evangelist because she was looking for a role in which she could work closely with the technology, but coding wouldn’t be her only task of the day. She said she considers herself a people person and loves to interact with other developers to see what they are building or what technology they are using.

Qvarnström said he tries to produce at least one technical article a week, and he regularly checks into groups on social media. He also said his role depends on the focus of the day. One day he could be working on outreach to the public, the next he could be doing webinars or talking with engineers.

For those seeking opportunities as an evangelist, having a development or engineering background is crucial. Srinivas said a candidate has to have “technical chops,” or be an engineer proficient in a language or two.

“It also helps when you are closely knit to the developer community and have an individual presence other than just being associated with the company you work for,” she said. “Developers will value your opinion more than if you were just a mouthpiece for your company.”

To thrive as an evangelist, Holt agreed that it helps to have a background as a software developer, or to really understand the industry and its developers. “If you are able to reach and influence those developers, that gives you a tremendous amount of leverage,” he said.

To be truly successful in this role, developer evangelists need to have credibility. If someone searches online regarding a developer evangelist, what should come up are technical blog posts and some sort of code repository, like GitHub. The goal, Makai said, is to have someone say, “Wow, this is someone that is really a developer.”