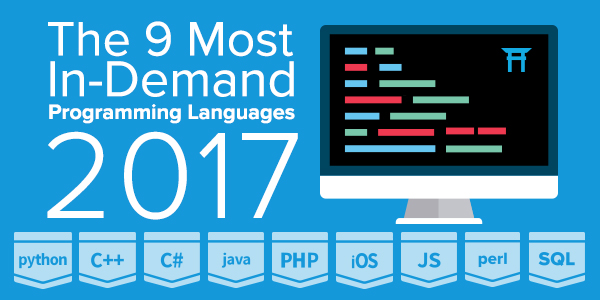 The programming boot camp Coding Dojo did its own analysis of the most in-demand programming languages of the year by poring through data from the job search engine Indeed.com. The boot camp’s research found Perl, Python and SQL are among the languages that are consistently showing up in job postings.

Last year’s research from Coding Dojo found that SQL, Java and JavaScript were the Top 3 programming languages of 2016, with C#, Python, and C++ following behind them, respectively.

This year, SQL came up as the most-demanded programming language for 2017. According to Jay Patel, a full-stack developer and lead instructor at Coding Dojo, SQL showed up in nearly 50,000 more Indeed job descriptions than year. SQL is a common language used to communicate and manipulate databases, and there are variations like MySQL and Microsoft SQL that are popular amongst developers, according to him.

Java came in second, with the amount of Java positions available on Indeed going up by almost 30,000 (to more than 60,000) in 2017 compared to last year. Patel suggested this could be because of continuing Android growth, where all native Android apps are built in Java, and that 90% of Fortune 500 companies use Java as a server-side language for back-end development.

“Users have been getting excited about the upcoming Java 9 launch in July 2017, although Java Enterprise Edition declined in popularity in 2016,” wrote Patel.

“In October 2016, Microsoft launched the beta version 2.0 of its Cognitive Toolkit open-source deep learning framework, which includes support for Python.”

Respectively, the other programming languages below the top three were JavaScript (which went down one place in ranking), C++, C#, Perl, iOS (Objective-C or Swift), and PHP.

Patel also wrote that Ruby on Rails disappeared from the list (it was No. 9 on last year’s list), suggesting it was caused by “Ruby losing some of its market share to increasingly popular alternatives, like Node.js and Go.”