Docker announces commercial solutions, lays out next steps with Microsoft

“Since its launch at DockerCon SF last June, Docker Hub has attracted hundreds of thousands of users and tens of thousands of organizations,” said Ben Golub, CEO of Docker. “These users and organizations have given us valuable feedback on the nature of the commercial solutions they would like to see from us to support their deployment of business-critical distributed applications. We have used this feedback as well as feedback from our Docker Trusted Registry beta program to define our commercial solutions for production environments in a way that creates confidence for leveraging Docker as a cornerstone technology and business partner.”

(Related: What else happened at DockerCon)

“The trusted registry is a natural monetization extension for Docker,” said Al Hilwa, industry analyst at research firm IDC. “The model is similar to source-code and binary repository players that have preceded Docker, like Git, Bitbucket and JFrog. Being able to work in a private space, whether hosted or on-premise, is a key requirement for enterprises, especially those working in regulated fields.” 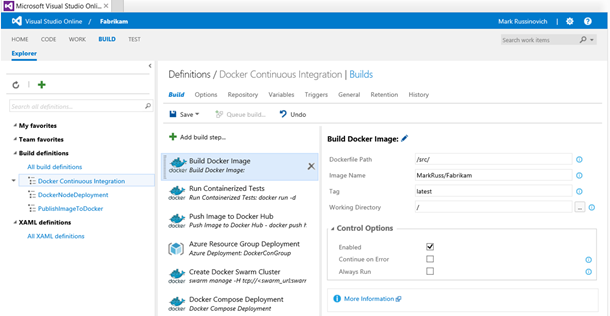 Microsoft also announced it will be part of the Open Container Project.

“When we release Docker containers, Docker Swarm and Docker Compose support on Windows Server, we will bring together customers and community to offer the most complete container experience, spanning tooling, operating system and cloud platform, all so you can deploy cross-platform applications simply and easily,” wrote Corey Sanders, director of program management for Microsoft Azure, in a blog post.