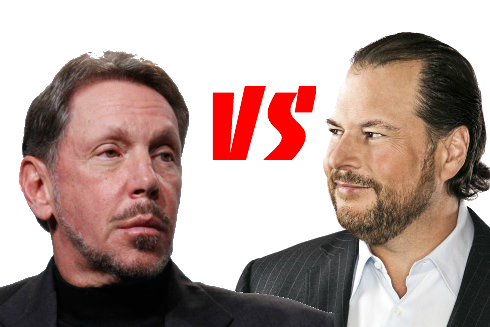 Let’s compare, if we can for a moment, Salesforce CEO Marc Benioff and Oracle CEO Larry Ellison. This week, San Francisco played host to its largest conference ever, when 170,000 people attended Dreamforce.

Next month, a whole lot of people will be attending Oracle OpenWorld as well. I expect somewhere between 50,000 and 75,000. Any way you slice it, these two titans of industry take over the city almost entirely when they put on their shows. Thus, we’ll have to break down the comparison item by item.

Best Keynote: Marc Benioff
As a reporter, I actually don’t like the Saleforce.com keynotes. I’m there to report on the news and announcements, but 90% of a Benioff keynote is him asking silly joke questions to his stage-mates, and intently discussing charity work.

Seriously, Benioff takes the stage as his cofounder Parker Harris comes on in a silly Lightning Man costume. Harris then demos the product while Benioff says things like, “OK, Parker, this is going to take an hour to compile now, right?” Leaving Harris to correct Benioff with something like, “No, it works in seconds!” Just like an infomercial.

(Related: What happened at this year’s Dreamforce)

While the actual news is usually hidden behind the two previous hours of sales pitches, it’s still far better than an Oracle keynote. Larry likes to come out on stage for his keynote and ignore every slide he’s prepared. He also likes to tell people they should buy a billion-dollar sailboat. His keynotes involve him racing through slides by shouting “I don’t want to talk about this, next slide,” until he hits the slide that says Oracle is 10x faster than IBM.

Benioff opened his keynote by introducing his mother, a cancer survivor. Ellison doesn’t even have a mother. He was spawned from the ocean floor fully formed, carrying a katana.

Marc wins this one hands down, especially because he has music in his keynotes. This year, it was Stevie Wonder, whom I can only imagine was trying to figure out if there really were all those people out in the audience. He sure couldn’t hear them cheering or singing with him. Despite the anemic crowd participation, it was still a vastly better keynote than Oracle’s.

Best Show Floor: Marc Benioff
The Oracle show floors are spread across the city. JavaOne gets stuffed into a third-floor hotel expo room about 10 blocks from the rest of the show. It’s really a shame this once-venerable conference has been shoved into a backwater of Oracle’s ocean of content.

For this reason alone, Oracle loses this category. The Salesforce show floor is certainly flashier and prettier, but it’s the disrespect JavaOne gets that seals the deal on this one.

Best Speakers: Marc Benioff
While this year’s Dreamforce was not as star-studded as last year’s, the sheer volume of talks and topics wins it for Salesforce. Everything from science fiction writers talking about the future of software, to learning how to be an expert at e-mail marketing, this was a conference that made sure there were talks for every attendee.

Oracle does give good talks at OpenWorld, but the topics are often very confined. Even JavaOne’s topics tend to be isolated to the language, and not to anything around it. Gone are the days of giant Scala talks and Clojure meetups. Now, JavaOne is all about buying in-memory data grids, content-management systems, and build and deploy tools. While that’s all highly useful stuff, it can get quite boring when you’re sitting through your fourth Maven talk.

Best Food and Drinks: Marc Benioff
This was a runaway. While the food that Salesforce had at the Moscone Center was—let’s just say they served me a tofu dish that tasted and felt like wet cardboard—they made up for it with party food, vendors bringing in free food trucks, and a few restaurants that were literally free to conference attendees.

Compare that to Oracle, which relies entirely on the hotels and convention centers for their catering. Additionally, Oracle parties have the same food every single year. It gets dull.

Best Party: Larry Ellison
The only category Oracle won here is thanks to Salesforce’s poor party planning. Oracle used to be the king of logistics: Their party is on Treasure Island, and requires busses to drive everyone out there and back. This is an enormous undertaking, one that Oracle has polished to a shine in the past six years.

Salesforce is still figuring this whole big party in SF thing out. Their party was at Pier 70, a giant pier that’s slated to become condos in a few years. The busses out to the spot were misdirected and dropped people in the wrong place.

Then, once there, no one working the event knew how anyone was supposed to get inside, so there were almost 60,000 angry people waiting outside the venue after it was supposed to have opened.

Once inside, the Killers and the Foo Fighters played, but no one could get into the concert halls due to overcrowding. Making things worse, the security guards keeping people out of the venue were charging people US$5 to be let in!

So, while the music and food were great, the Salesforce party gets a big black mark.