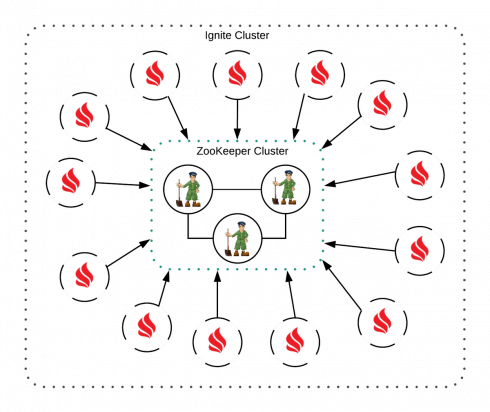 “Apache Ignite was always appreciated by its users for two primary things it delivers – scalability and performance. Throughout the lifetime many distributed systems tend to do performance optimizations from a release to release while making scalability related improvements just a couple of times. It’s not because the scalability is of no interest. Usually, scalability requirements are set and solved once by a distributed system and don’t require significant additional interventions by engineers,” the ASF wrote in a post.

“The new ZooKeeper Discovery uses ZooKeeper as a single point of synchronization where Ignite nodes are exchanging discovery events through it. It solved the issue with long-to-be-processed discovery messages and, as a result, allowed Ignite scaling to large cluster topologies,” the ASF wrote.

The Ignite team suggests users keep the default TCP/IP discovery solution if their cluster is unlikely to scale beyond 300s nodes.

The team also improved the way users train machine learning models over terabytes and petabytes of data. “ The partition-based datasets moved us closer to the implementation of Zero-ETL concept which implies that Ignite can be used as a single storage where ML models and algorithms are being improved iteratively and online without ETLing data back and forth between Ignite and another storage,” the ASF wrote.