Mobile development is on the rise, but for developers, it’s still got a long way to go.

Developer tool provider Telerik’s 2014 “App Development State of the Union” survey of 2,200 developers and IT executives showed that while mobile development is a priority, widespread adoption is stagnant and developers are slow to integrate technologies to facilitate the transition. The survey, conducted to determine application development priorities and pain points, showed that 51% of developers are not yet building mobile applications, with 93% saying desktop is still their primary focus. 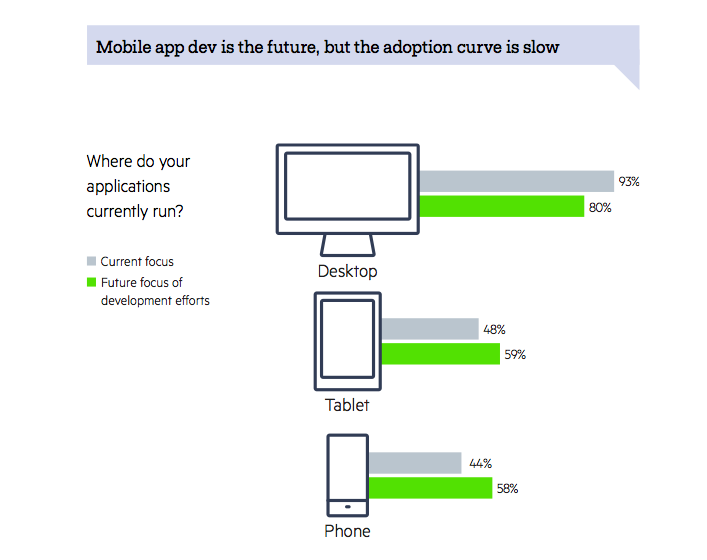 The survey also showed that the majority of app developers are not collecting user feedback or leveraging cross-platform development tools. Of those developing for mobile, 72% are focused on Web/HTML5 app development. Preferred programming languages also shed light on which platforms developers are gravitating toward. Developers could choose more than one, so the top language was C# with 81%, followed by JavaScript at 47%, .NET/Visual Studio at 26% and Java at 18%.

Here are some of the key findings from Telerik’s survey:
• “While mobile app development is routinely described as a priority, in both current app development and deployment, adoption is slowly growing. Desktop remains a key priority for the next 12-18 months.
• More than half of respondents are not yet developing for mobile, due to current workload restraints.
• Of those developing for mobile, the majority are focused on Web/HTML5, leaving native and hybrid app development neck-and-neck in terms of adoption.
• Open-source technology continues to be an important aspect of the development process, leveraged in more than 80% of development projects.
• Respondents seldom collect end-user feedback about app development priorities, though users are involved in app creation more than ever before.
• When asked about Backend-as-a-Service (BaaS), 36% were unfamiliar with the technology and 42% weren’t using it. Yet, 68% of apps created today require real-time data.”

Of the total respondents, 59% were development managers and team leads, 12% were architects and analysts, and were 10% executives, with 29% coming from startups, 29% from enterprises and 42% from small to mid-sized businesses.

Telerik’s “App Development State of the Union” survey can be found here.