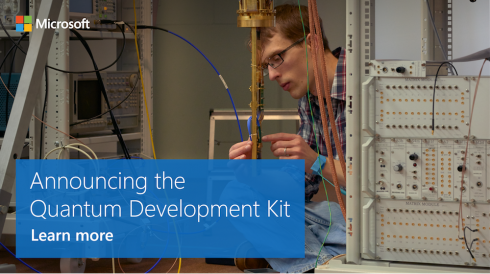 “Quantum computing takes a giant leap forward from today’s technology—one that will forever alter our economic, industrial, academic, and societal landscape. With the preview release of the Microsoft Quantum Development Kit, we are one step closer to realizing this vision,” the Microsoft Quantum Team, wrote in a post.

The kit is designed to get developers up to speed with programming on quantum computers. According to the company, developers do not need to be experts in quantum physics. The kit is deeply integrated with Visual Studio, so aspects will be familiar to developes who already use VS to develop apps.

“What you’re going to see as a developer is the opportunity to tie into tools that you already know well, services you already know well,” Todd Holmdahl, corporate vice president in charge of the company’s quantum effort, said in an announcement. “There will be a twist with quantum computing, but it’s our job to make it as easy as possible for the developers who know and love us to be able to use these new tools that could potentially do some things exponentially faster – which means going from a billion years on a classical computer to a couple hours on a quantum computer.”

The Q# programming language was designed specifically for quantum. It is a high-level programming language that includes a native type system for qubits, operators and abstractions, according to the company. The quantum simulators will enable debugging support and support for simulations that requires more than 40 qubits. The kit will also provide a trace simulator for optimizing code to run on quantum computers.

In addition, the company is providing a suite of documentation, libraries and sample programs to get people familiar with aspects of quantum computing such as quantum teleportation.