Microsoft has announced a major update to the beta release of Windows App Studio, its Web-based developer tool for creating mobile apps.

The most significant changes and additions to Windows App Studio, detailed in a blog post by Emilio Salvador Prieto of the Windows Phone Developer Experience team, are integration with Microsoft’s TouchDevelop programming language, and the end of support for Windows 8.0 app creation, editing and updating.

Windows App Studio now has the ability to import apps and games programmed using TouchDevelop as a data source.

“App Studio users can now add single or multiple TouchDevelop sections to add richer features to their apps,” Prieto wrote. “With just a few clicks, select TouchDevelop scripts are imported into App Studio, ready to generate an AppX package to side-load on any phone, tablet or PC running Windows 8.1, or [to] publish to Windows Phone or Windows Store.”

At the moment, there is no full support for importing TouchDevelop apps that include Web requests and device capabilities such as Bluetooth and Calendar integration. But according to Prieto, developers can test functionality by copying script IDs into TouchDevelop DataSource in App Studio to verify whether any given app or game can currently be imported.

As for Windows Phone 8.0 apps, developers will still have access to existing apps, but going forward changes to those apps can only be made in Visual Studio 2013. Windows App Studio is now only compatible with Windows 8.1 universal apps.

A closer look at TouchDevelop
TouchDevelop is a visual programming language developed by Microsoft Research over the last several years, designed to simplify the creation of cross-device mobile and Web apps. 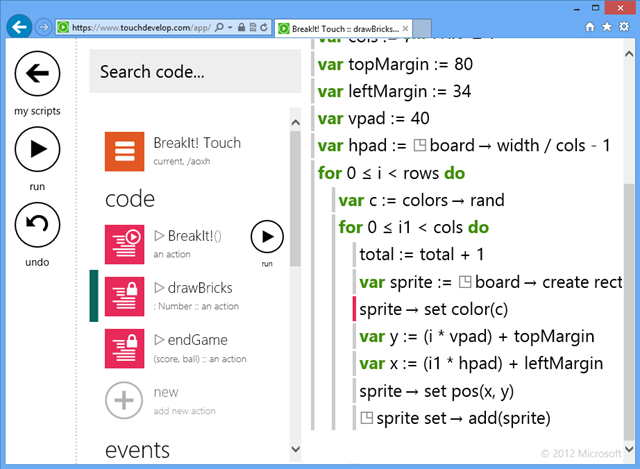 The language also comes with its own programming environment, in which a developer or any TouchDevelop user can write, install, run, edit and publish scripts using touch gestures onscreen on a smartphone or tablet, without the use of a PC or keyboard. TouchDevelop also has its own script bazaar to share scripts, and TouchDevelop apps can be submitted to the Windows Store or Windows Phone Store.

“The way in which we interact with computing devices is changing: Instead of keyboards, advanced touchscreens become more common. Mobile devices are often equipped with more sensors, such as location information and acceleration, and are always connected to the cloud,” the Microsoft Research TouchDevelop page stated.

“TouchDevelop is a new programming environment and language built around this new reality. Its typed, structured programming language is built around the idea of only using a touchscreen as the input device to author code. It has built-in primitives, which make it easy to access the rich sensor data available on a mobile device. In our vision, the state of the program is automatically distributed between mobile clients and the cloud, with automatic synchronization of data and execution between clients and cloud, liberating the programmer from worrying (or even having to know) about the details.”

TouchDevelop is also part of Microsoft’s effort on behalf of Computer Science Education Week and the Hour of Code. Microsoft launched the interactive tutorial previewed below to teach coding through the visual programming language.