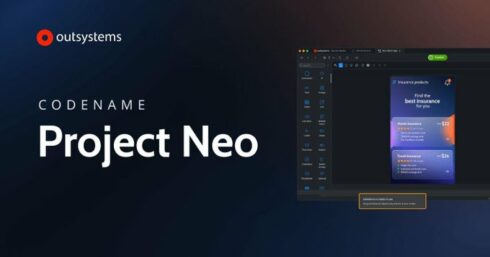 OutSystems has launched a preview of Project Neo, the codename of a platform that combines dynamic scaling cloud architecture and modern CI/CD practices with a low-code environment.

“OutSystems is breaking the boundaries of traditional software development. With Project Neo, we’ve architected a platform that allows any development team to build any app at internet scale,” said Paulo Rosado, CEO and founder of OutSystems. “Developers should be the artisans of innovation in their organization, but they are mired in complexity that stifles their ability to innovate and differentiate. Instead of using their talents to fix, change and maintain code and aging systems, you can give them industry-leading tools that unleash their creativity on your business, and achieve massive competitive advantage.”

Customers can build applications based on a platform that combines containers and Kubernetes with cloud technologies such as serverless, database autoscaling, event and messaging-based orchestration. This enables teams to move legacy applications to the cloud and to build new and more strategic applications, or to embark on digital transformation initiatives.

It enables developers to make critical changes to applications within hours rather than days or weeks, constantly updates with new cloud technologies, auto-scales consumer and B2B apps to huge spikes in demand, and powers the work of both individual developers and large, enterprise software factories.

Project Neo is now available for public preview ahead of its official launch in 2022. Additional details are available here.