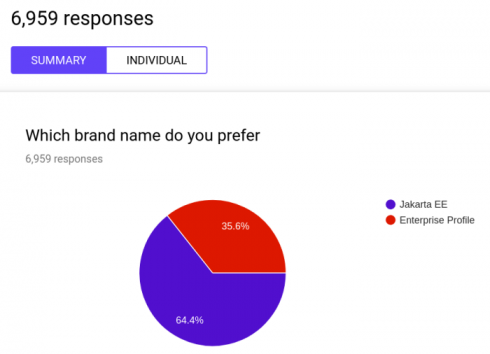 Java EE has been rebranded to Jakarta EE by the Eclipse Foundation community.

The name comes from the Jakarta Project, an early Apache open-source effort.

“It is preferred that when you are generically referring to this open source software platform that you call it Jakarta EE rather than EE4J. EE4J, the Eclipse Top-level project,  is the only name we’ve had for a couple of months, but as we at least tried to make clear, that was never intended to be the brand name,” Mike Milinkovich, executive director for the Eclipse Foundation, wrote on his blog.

In November 2017 it was announced that Java EE would be turned over to the Eclipse Foundation. As a result, Wayne Beaton, director of Open Source Project at the Eclipse Foundation posted on GitHub that the Java EE project was in need of a new name for the set of specifications created by the new community.

The Eclipse Foundation had launched an effort on GitHub to select the new name, which was managed by the EE4J Project Management Committee and the Eclipse Management Organization.

Beaton offered the community the chance to nominate names via the GitHub issue record it created. The nominations were open from November 15 to November 30 2017.

GitHub user kwsutter suggesting using EE4J, which is the name of the top-level Eclipse project that contains Java EE, but this user suggested using it for both the project name and the new name for Java EE. He also suggested following the convention for naming open standards and calling it Open EE.

Some other suggestions that didn’t make the cut included Open Server API and OpenJEE.

In the end, the two nominations that were selected to be in the running were “Jakarta EE” and “Enterprise Profile.”

“The EE4J PMC considered numerous factors, but in the end the selection process effectively boiled down to identifying those names from the suggestions that The Eclipse Foundation can register and hold as a trademark on behalf of the community,” Beaton wrote in a GitHub issue.

The community was able to vote on which name they wanted via a Google poll through February 23.