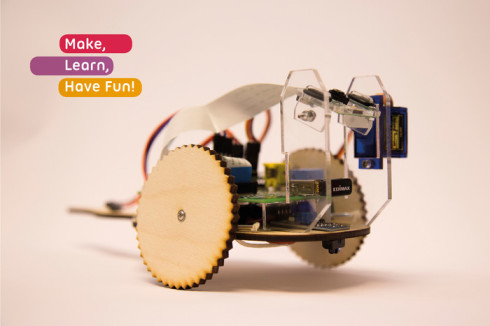 Developed by U.K. startup Agilic, TiddlyBot has already exceeded its Kickstarter project goal and is now funding stretch goals of creating an illustrated beginner’s guide to robotics and developing interactive games for TiddlyBot. The modular design allows children to construct their own custom TiddlyBot and program it using a Blockly, Python or JavaScript API.

The robot is then controlled via a Web interface from a smart device or PC. TiddlyBot costs US$48, and the kit includes the interface board, SD Card, illustrated instructions and a learner guide. – Rob Marvin

In response to developer feedback, the entire TypeScript codebase has been moved into a GitHub repository along with a new issue tracker and the TypeScript documentation. As for the new compiler, TypeScript program manager Jonathan Turner said it compiles code 5x faster than the current compiler in TypeScript 1.0. Microsoft is still working on developing several features:

Microsoft’s Stephen Elop on layoffs, Windows Phone and Nokia X plans
Stephen Elop, Microsoft’s executive VP of devices and services (and former Nokia CEO), followed up Satya Nadella’s employee memo with an e-mail of his own indicating there would be 12,500 layoffs and revealing plans for Windows Phone and the Nokia X Android phone.

According to Elop’s memo, Microsoft’s devices and services division will reduce 12,500 factory direct and professional employees over the next year. The news is buried deep into the memo, after he detailed Microsoft’s focus on the Windows Phone market, particularly in delivering more budget smartphones and low-cost Lumia devices. He also signaled the official end of the Nokia X line of Android phones, explaining that all future Nokia X designs and products will be shifted to Windows Phone devices.

The app has a new risk-scoring framework that enhances threat detection and containment by allowing users to assign risk scores to any piece of data, as well as on-the-fly visualization features, risk-based analytics and guided search. The app’s Integrated Threat Intelligence Framework can now also integrate complex URLs and domain names.