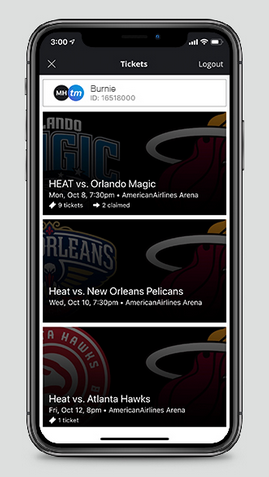 How much fun is it for a developer to be in an elevator, peek over the shoulder of the person next to them and see them using an app on their phone that the developer built? That’s just what happened to Matthew Jafarian, vice president of Digital Strategy & Innovation at the NBA team, Miami Heat recently. In the 3 years Jafarian’s been with the Heat, he’s spearheaded the NBA franchise organization’s digital transformation by embracing mobile and augmenting the American Airlines Arena DAS network with a robust WiFi to support the increased mobile usage.

The results of going mobile via the Miami Heat mobile app have been record-setting. The franchise holds the Ticketmaster record for highest mobile ticketing usage of any NBA or NHL team. Last season 1 in every 3 fans entered the AA Arena using the Miami Heat app, turning in a 220% usage increase over the season before.

All of Jafarian’s development efforts are driven by an enthusiastic passion for delivering a better fan experience that he calls Return on Experience (ROE), and business ROI for the team organization.

ROE
The fans now enjoy personalized updates on the game, player stats, and scores via the app. The arena’s premium dining locations now take online reservations, have iPad-driven table management, and integrated CRM to replace the previously pen-and-paper operation. Right now they’re in Phase 1 of a Cashless Zone, in which fans either pay through the app or by credit card. What this does is shorten the food lines so fans spend less time in line, more time watching the game. There is also an initiative to implement advance food orders.

ROI
Coupled with a new marketing automation platform, an AI-powered crowd-measuring system, fan-facing Wi-Fi and an aggressive app development strategy, the ownership is seeing significant ROI. Fans are beginning to transact through the mobile app to the extent their transactions equate to $50,000 per month in direct mobile app revenue. The improvement in UX doubled order fulfillment capacity and because the arena will be going paperless, with all ticketing becoming mobile, the app has become a major lead-generation tool as well. It allows the organization to get to know its fan base and push relevant offers to generate revenue. The mobile-only ticketing process has also reduced operating costs.

The Transformation Process
Jafarian is a veteran of early mobile development, starting at Simplikate in 2008. He built and grew Simplikate’s mobile app development platform. The company was acquired by Phunware, an enterprise cloud development platform, where he delivered solutions for several verticals. Phunware was a Microsoft shop, hosted on AWS, managed services with Terremark, and built on Visual Studio using a variety of languages.

When he arrived at the Heat, he inherited several legacy apps and contracts that he had to incorporate into the mix, but said the transition away from the old way to the new way was remarkable. “We moved away from on-prem to the cloud,” Jafarian said. “We got rid of some of the old archaic rules, processes that slowed us down, and we became much more of an agile organization. We didn’t sit there and plan what our years were going to look like for the next three years. We make changes as we go. Data-driven decisions based on what we see happening in the marketplace.” He started by doing proof of concepts where it made sense. Having been on the other side of the table, he leveraged the Heat brand with vendors whose tech he thought would work, persuading them to explore the project before going into a full-scale engagement. “It’s been a transition, but over the last three years, that’s the organization that we built,” he said.

He said they looked at several iPaaS solutions before committing. They have an enterprise agreement with Microsoft and use Microsoft Flow to automate workflows between apps and services. The other iPaaS they use is Software AG’s built.io, now called Integration Cloud.  “I was able to go to one solution to find an app back-end, a content management system, and integration platform plus developers on their end who could provide services on top of all these products that they knew really well,” explained Jafarian. “We use it for different use cases. Fan facing stuff, orchestration, multiple integrations. For really enterprise heavy-duty stuff we use software AG.”

According to Jafarian, “The built.io/Software AG platforms give me 80% of what I need out of the box. The other 20% was customizing to our own needs. Most of that time is spent on integrating with third parties like Ticketmaster, who is a very important partner of ours. They spent time updating the latest SDKs for group mobile ticketing experience for our fans and built a feature on top of their platform called ‘Our Mobile Wallet,’ which allows fans to pay for food, beverage, retail, premium dining anywhere in the arena. For every $50 they spend they earn three arena bucks back that can be spent anywhere in the arena. It’s a great tool. It’s the start of a new loyalty program for us.”

Other partners include Adobe, which provides campaign and analytics products used by the team across a variety of digital properties, including the mobile app. Fortress provides ticketing pedestals and a loyalty platform that’s baked into their digital properties. The reason it was selected is because it plays well with the different point-of-sale devices and systems that fans currently use.

Advice
Jafarian recommended not starting with the technology. He suggested, “Start with your vision. Identify what business needs you’re trying to solve for. Figure out what you’re trying to do. Then work your way backwards with technology partners that will help you get there. Don’t have a partner come in and say, ‘Here’s what I have. This is what you need to do.’ I like to know what I want before I invite a slew of partners.”

He said it’s important to get leadership buy-in right. “We were able to undergo digital transformation because we had support from the top. I didn’t have to convince the organization this is important.”

“As a developer I think it’s easy to live in your own world. You almost literally speak different languages. It’s important to step outside that world and understand what the benefits would be to your organization. What business needs can be resolved by the work that you’re doing? To communicate that up, down, left, right any way you can.You also have to sell yourself.”

Lessons Learned
Jafarian pointed out, “We learned that development is not a one-time exercise. We’ve been successful because we have a team of developers. We hire companies that have a team of developers. We maintain long-term multiyear relationships with them. Of course, we have full-time employees in-house too. An app is never done. You have to constantly be listening to your customers or fans and implementing their feedback into the app. Rinse and repeat over and over again. That’s what we love. We love seeing the evolution of where we started to where we are now. It’s just going to continue to get better.”