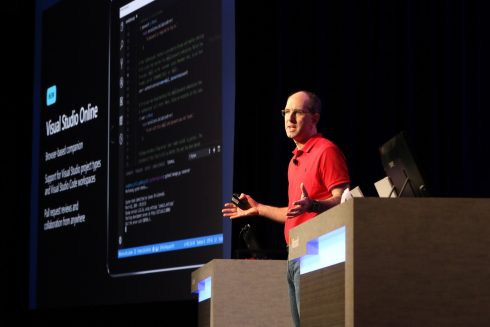 Microsoft is closer to delivering a long sought-after capability for Visual Studio developers – a web-based version of the IDE. The company demonstrated Visual Studio Online for the first time at this week’s annual Build developer conference in Seattle.

“With Visual Studio Online, developers can use any device that has a web browser to open, edit and debug code stored remotely, including from a hosted GitHub repository or any other location,” Guthrie said. “It supports both Visual Studio Code Workspaces and Visual Studio Projects, and it provides all the editing features and customizations that you’d expect, like IntelliSense, like Git support and extensions.”

Visual Studio developers have long sought a web edition. “If I need to do a quick pull-request or edit and I’m not near a computer, this will let me do it from my phone, which would be very convenient,” said Build conference attendee Christopher Hunt, a developer with PerByte, a firm that provides software consulting to non-profit associations. Hunt, who has worked with Visual Studio for 12 years, said he’s awaited this capability for some time, and looks forward to testing the preview.

In other significant developer news at Build, Microsoft said it will deliver a unified .NET Core platform next year that brings together its various toolchains into a consolidated framework. The new .NET 5 will use one Base Class Library with APIs for all application types and platforms including cross-platform ASP.NET web development, Xamarin for iOS and Android, Windows and IoT.

The unified .NET 5 platform will bring together the various frameworks including ASP.NET for web development, Xamarin for Android and iOS mobile apps, Windows Desktop and IoT. “So, .NET 5 is about converging all of .NET,” Montgomery said, who added that the company won’t have a preview until next year.

Montgomery said Microsoft is on pace to release the new .NET Core 3.0 this summer, which will bring in various Windows Desktop technologies such as Windows Presentation Foundation (WPF) and Windows Forms, as well as support for C# 8.0. The company earlier this week, released the fifth preview of .NET Core 3.0. Microsoft is bypassing a .NET Core 4.0 to avoid confusion with the Windows .NET Framework 4.x, hence the shift to .NET Core 5.0 next year.