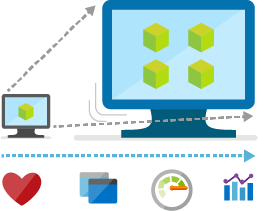 The team behind the distributed systems platform, designed to easily package, deploy and manage scalable and reliable microservices and containers, will be transitioning to a completely open development process on GitHub over the coming months.

While the Service Fabric repo available on the project’s GitHub contains build and test tools for Linux, allowing users to clone and build Service Fabric on Linux systems, run basic tests, open issues and submit pull requests, the team says it is “working hard” on migrating the Windows build environment to GitHub with a complete continuous integration environment.

“We’ve been developing Service Fabric internally for Windows for close to a decade, and most of that time it was a Microsoft-internal platform, which means we have close to a decade’s worth of internal Microsoft tools to migrate and processes to refine before we can put something usable out on GitHub,” the team wrote in a development blog. “When we started working on Linux support a couple years ago, we were a public product and already planning to go open source, so we made sure to use common, publicly available tools as much as possible.”

The team began the transition in March of last year with the open-sourcing of elements of Service Fabric, including Reliable Services, Reliable Actors and the ASP.NET Core integration libraries, and have been moving other “small parts” of Service Fabric to GitHub, such as Explorer and the CLI over the course of the past year.

“We’ve heard from many of you about the importance of being able to participate in the development and direction of the platform that you depend on to run your mission-critical applications,” the team wrote. “We stay active on GitHub and Stack Overflow for that reason, and open sourcing the platform is the natural evolution to make that collaboration even better. That’s why we’re committed to making Service Fabric a successful open source project by moving our entire development and planning process onto GitHub, where we can openly collaborate with the community to make Service Fabric better for everyone.”