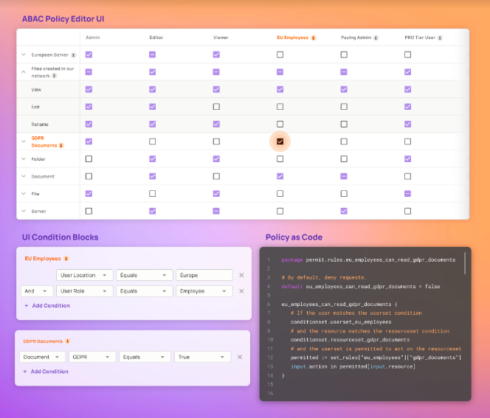 ABAC has low-code/no-code interfaces for building permissions into applications, which allows any team at a company to incorporate permissions, not just developers.

According to the company, ABAC includes all elements required for enforcement, gating, auding, approval flows, impersonation, and automating API keys.

Permissions can be based on a number of different attributes, such as geo-location, subscription status, billing status, usage metrics, and relationship to the resource owner.

“When you first build an application, setting up permissions is more straightforward: you just have a single service and a few users, and what they can do is based on their role within the organization,” said Or Weis, CEO and co-founder of Permit.io. “This is what’s known as Role Based Access Control (RBAC). But as your application scales, Attribute Based Access Control (ABAC) is necessary to fully address all of the different use cases for your company and your customers. Building and maintaining an ABAC system yourself is incredibly complex and time consuming – which is why we’ve spent the past two years building a low code platform that makes it simple.”

The company launched earlier this year with $6 million in seed funding. Along with Weis, Asaf Cohen, a former software engineer at Facebook and Microsoft, is also a co-founder. They based the company on the open-source project OPAL, which the two created.

FusionAuth and Permit.io solve tough authentication and authorization problems together