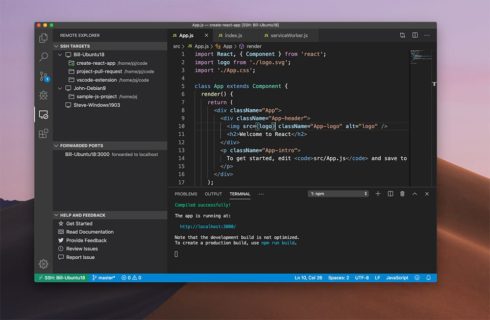 “Given the scale of development at Facebook, supporting the efficiency and productivity of our engineers is key. Constant work is being done to enable Visual Studio Code to be the IDE of choice inside the company, whether by building extensions or enhancing our current technologies to better support it,” Joel Marcey, developer advocate at Facebook, wrote in a post.

The company explained Microsoft’s remote extensions can help developers work with larger, faster, or more specialized hardware than what’s available on a local machine. It can help developers create tailored, dedicated environments for each project’s specific dependencies without worrying about errors due to mixed or conflicting configurations. And it also offers the ability to switch between multiple running development environments without impacting local resources or tool performance.

“While engineers at Facebook have Visual Studio Code installed locally on laptops, most development is done directly on individually-reserved development servers that live within our data centers. Being able to access code on these servers in a seamless, performant way is critical for productivity,” Marcey wrote.

According to the company, the development tool runs and on macOS, Windows, and Linux, and has the well-defined extension API necessary for Facebook to continue building the important capabilities required for the large-scale development.

Facebook said it has already been working with Microsoft on extensions of its own.

“To help Microsoft enhance its product offering, we have provided input through our experience and expertise supporting remote development for Nuclide. And Microsoft has now created such a robust remoting experience, it has allowed us to move off our own custom solution,” Marcey wrote.