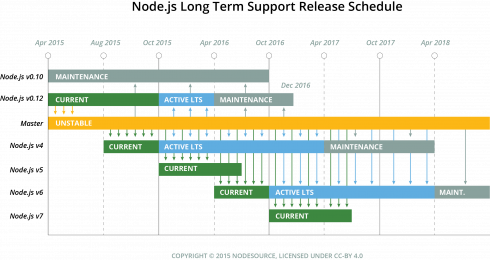 The Node.js Foundation has announced Node.js 11 is moving up to the current release line as of this week. As part of this announcement, Node.j 10.x will more to Long Term Support status by the end of the month.

“When Node.js 10.x becomes the latest LTS version, it is ready to be used in production and by applications that need to scale,” the foundation wrote in a post.

According to the foundation, the new updates are focused on performance, security, integration of newer JavaScript features, tracing and diagnostics, the organization said, and follow the new release structure of Node.js which sees even-numbered releases enter LTS while odd-numbered releases get the latest features more quickly.

Some of the new features in Node.js 10 include:

While the new features in Node.js 11 aren’t ready to be tested in production, the foundation wrote, developers will be able to test the release’s ability to reschedule interval timers even if the previous interval produced an error. Additionally, version 11 no longer supports FreeBSD 10. The full changelog is available here.