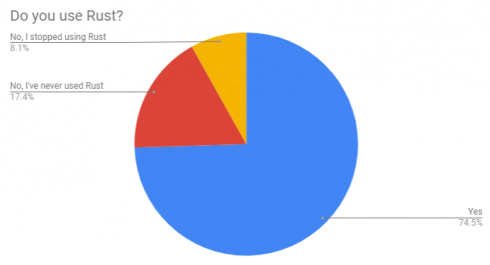 This year’s survey was the first to be offered in languages other than English, increasing the number of respondents to 5,991. Seventy-five percent of those respondents identified as users of Rust, an increase from last year’s 66.9 percent.

“Looking closer at these users who feel unproductive in Rust, only about 25 percent are in their first month of use,” the report stated. “The challenge here is to find ways to help bridge users to productivity so they don’t get stuck.”

Investment in and the size of Rust-based projects has also grown, the company found, with “medium to large investments” of 10,000 to 100,000 lines of code now accounting for 23 percent of projects versus last year’s 16 percent.

Overall, Rust use in the workplace has grown, with 8.9 percent of respondents using Rust full-time, up from last year’s 4.4 percent, and 21.2 percent using the language part-time, up from 16.6 percent last year.

“There is more room for Rust to grow into more companies, over a third of which users report aren’t currently looking into evaluating Rust in the coming year,” the company reported. “When paired with the survey data that said that nearly half of non-users needed the company support, this shows the need for further company outreach or more company-focused information about Rust.”

The team also found that creating a welcoming, accessible community for new and veteran users is a priority. “New users should feel encouraged to explore, share ideas, and generally be themselves,” the team wrote.

This is reflected in the list of challenges the company says it needs to tackle based on the survey results:

“Rust continues to grow steadily, and with it, both its strengths and challenges are introduced to a broader audience,” the team wrote.