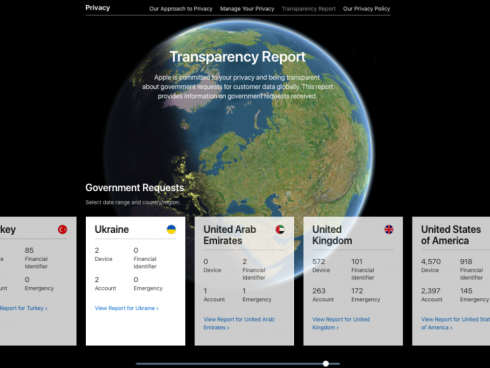 Apple released its latest report showing that most of U.S. requests to access customer data by the government and private parties have to do with stolen device and fraud investigations. The report also outlined similar requests its receives worldwide.

The data shows that Germany made the most requests at 12,343 and Apple provided data for 77 percent of those requests. The United States came at a distant second with 4,680 requests and 81 percent of them honored by Apple.

Apple says the requests vary from law enforcement agencies working on behalf of customers who have asked for help finding lost or stolen devices or suspect their credit card is being used unlawfully to instances where an account is suspected to have been used unlawfully. Requests from the United States include subpoenas, court orders, search warrants, pen register/trap and trace orders, or wiretap orders.

Sony and Daiwa Capital Holdings announced the Innovation Growth Ventures, a joint venture company created to invest in tech startups. The companies plan to have the fund grow to $185 million.

“Through this fund, we hope to contribute and provide various forms of support to our investment targets, including sourcing, support with stock market listing, and matching support with other listed firms,” said Yoshihisa Kaneko, the executive managing director at Daiwa Securities Co. Ltd. which owns Daiwa Capital Holdings.

Similarly, Sony has invested in A.I.and robotics through its Sony Innovation Fund, which it established 3 years ago.

GitLab ends support for MySQL in 12.1

GitLab is ending support for MySQL in the 12.1 release because it slowed the production team down and required it to write a lot of MySQL-specific code while posing a number of limitations, the company said.

Some of the problems GitLab encountered with MySQL include the inability to support nested groups with MySQL in a performant way and the need to use hacks to increase limits on columns, which can lead to MySQL refusing to store data.

GitLab also said that most of its customers are on PostgreSQL and that users of MySQL could migrate to the PostgreSQL backend if they chose to upgrade to 12.1

Intel and 10 other companies involved in automotive and autonomous driving technology published “Safety First for Automated Driving,” a framework for how safe automated passenger vehicles (AVs) should be designed, developed, verified and validated.

The framework includes 12 guiding principles including that autonomous vehicle systems need to easily understand and predict surrounding road users, the automated driving system must perform a maneuver to minimize risk if the driver doesn’t comply with a takeover request, and automated vehicles should record relevant data in a manner that complies with applicable privacy laws when an event or incident is recognized.

However, the report states that it does not specify the minimum or maximum standards to be used by regulators, instead providing guidelines that can later be used by professionals involved with standardization to increase the safety of autonomous vehicles.