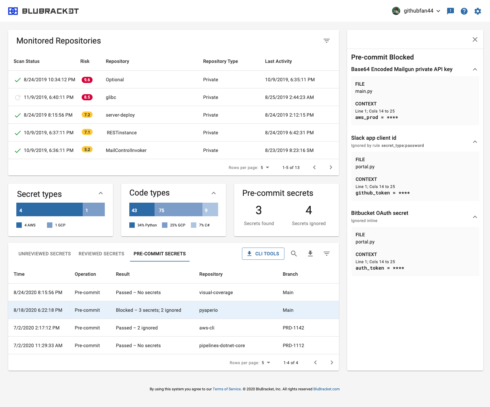 Users can connect to the tool through GitHub, scan up to 10 repositories and share reports in real time for more than 50 secret types in any language, according to the company in a post.

“Source code is quickly becoming the largest surface area of attack being exploited by hackers. BluBracket is exclusively focused on addressing the risks in your source code, and now is the right time to make our Community Edition freely accessible so developers and engineers have a robust and professional way to keep credentials out of code,” said Prakash Linga, the CEO of BluBracket.

The company said it will use the funding to scale its go-to-market operations, grow its engineering and customer experience teams, and to focus on its new Kong Konnect service connectivity SaaS platform.

“Kong Konnect takes cloud connectivity to the next level by providing a full-stack service connectivity platform that goes from API gateways to services meshes via open technologies like Kong Gateway, CNCF’s Kuma and Insomnia – running across every cloud and every platform, including on Kubernetes and VMs,” said Marco Palladino, the CTO and co-founder of Kong Inc.

The new version supports applications built on Hasura GraphQL Engine, which helps ensure resilience to failures. Users also have access to the latest features of Apache Spark 3 with the YugabyteDB YCQL API. Also, support for VMware Tanzu has been added to Yugabyte Platform as one of the cloud provider configurations, which enables users to build, run, and manage Kubernetes-based containerized applications.

Android released the course materials, but said they can be freely modified by instructors to adapt to the students’ needs.

Android also made its Android Study Jams program available to all developers to help people who want to learn in a peer group outside of the classroom.

Additional details on the new curriculum are available here.