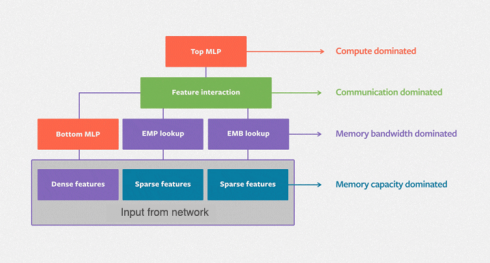 Facebook announced that it is open-sourcing its deep learning recommendation model (DLRM) to work with categorical data, which is used to describe higher level attributes.

The open-source implementation of DLRM can be used as a benchmark to measure the speed at which a model and associated operators perform and how various numerical techniques affect its accuracy, according to Facebook.

The DLRM benchmark is written in Python to allow flexibility and provides the code in either PyTorch and Caffe2 and an implementation can use Glow C++ operators. It also supports the generation of both random and synthetic inputs.

“By providing a detailed description of the DLRM state-of-the-art personalized recommendation system and its open source implementation, we hope to draw attention to the unique challenges that this class of models present,” Facebook wrote in a post. “Developing new and better methods to use deep learning for recommendation and personalization tools (and to improve model efficiency and performance) will lead to new ways to connect people to the content that is most relevant to them.”

React Native 0.60 is available
The React Native Core team introduced version 0.60 of React Native, introducing a migration over to AndroidX and improvements to the accessibility API such as announceForAccessibility for making screen reader announcements.

Also, CocoaPods are now part of React Natives’ iOS project; WebView, NetInfo and Geolocation have been extracted; Native modules are autolinked; and Upgrade Helper has been added.

Native code and dependencies will need to be migrated to the new version. A new tool called jetifier will patch node_modules and serve as a temporary solution to buy time for library maintainers to upgrade.

Rust 1.36
The new 1.36.0 version of the Rust programming language introduces performance enhancements and new features. This includes the stabilization of the Future trait, the alloc crate, the MaybeUninit<T> type, NLL for Rust 2015, a new HashMap<K, V>implementation and –offline support in Cargo.

The team behind Rust says it hopes the stabilized Future trait will give important crates, libraries and the ecosystem time to prepare for async/.await. Also, starting with Rust 1.36.0, the parts of std that depend on a global allocator, e.g. Vec<T>, are now available in the alloc crate.

The detailed list of changes can be viewed here.

The detailed list of Ultimate 2019.2 can be viewed here.