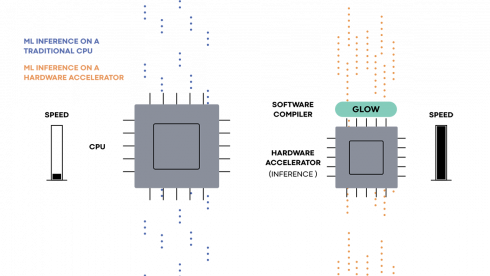 Facebook has open-sourced its experimental back end for the Glow compiler and runtime project. Glow is an open-source project that allows  developers to leverage community-driven software to accelerate the creation of new silicon products for machine learning. By creating an experimental back end, Facebook is strengthening the growing ecosystem of products for accelerating neural network workloads.

“As the use of ML applications becomes more common, hardware accelerators targeted by Glow can help companies reduce power usage and latencies,” Facebook wrote in a post.

Datadog adds APM features for .NET and PHP
Datadog has added distributed tracing support for .NET and PHP. Its .NET monitoring provides features such as a Service Map of the microservices architecture, service overview dashboards, trace search and analytics, and Watchdog, which uses machine learning to detect anomalies in .NET applications.

The company also added support for visualizing and analyzing PHP application performance. Developers will be able to see a high-level performance overview of each service that is running to easily detect issues. According to Datadog, the overview includes high-level metrics, span-level statistics, and resource-level anomalies.

On the other hand, not everyone is completely on board with the idea. Roughly one-third would not delegate work to an AI and another third feel that an AI could not outperform them.