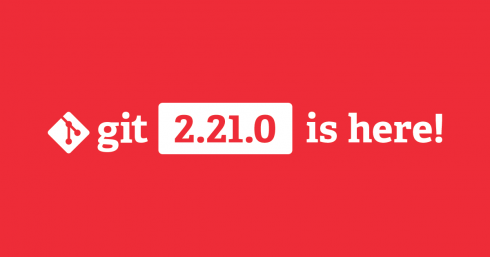 Git 2.21 has been released. According to the team, this release features contributions from over 60 developers.

The FIDO Alliance grants Android with a FIDO2 certification
The FIDO Alliance has granted Android with a FIDO2 certification, which means that any device running Android 7 or higher is now FIDO2 Certified out-of-the-box or after a Google Play Services update. FIDO2 is an authentication standard comprised of the W3C’s Web Authentication specification and FIDO’s Client-to-Authenticator Protocol.

As a result, developers can now add FIDO authentication to Android apps and websites through an API call to bring passwordless security to devices.

“Google has long worked with the FIDO Alliance and W3C to standardize FIDO2 protocols, which give any application the ability to move beyond password authentication while offering protection against phishing attacks, said Christiaan Brand, product manager at Google. “Today’s announcement of FIDO2 certification for Android helps move this initiative forward, giving our partners and developers a standardized way to access secure keystores across devices, both in market already as well as forthcoming models, in order to build convenient biometric controls for users.”

To combat this, the ASF has published committer guidelines, launched discussions of the multiple layers of the community, and called for monthly discussions and individual discussions. Since launching these new efforts, the foundation reported ithas gained 15 new committers and one PMC member.

“Advanced graphics and compute functionality is being deployed into an increasing number of markets where safety is paramount, and so APIs designed to streamline the safety certification process are now a key part of Khronos’ standardization activities,” said Neil Trevett, president of Khronos. “OpenGL SC has been widely used in avionics systems, but now the wider embedded industry is demanding access to the latest GPU functionality. Vulkan is the ideal starting point for a new generation safety critical GPU API, as its driver architecture is significantly more streamlined than OpenGL, as well as offering increased control of device scheduling, synchronization, and resource management.”