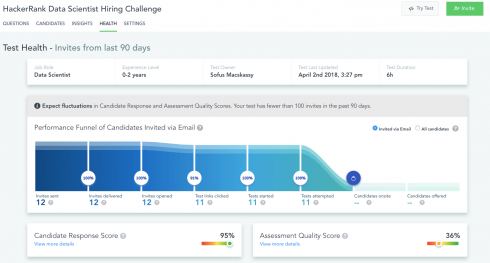 Most companies are flying blind when it comes to technical recruiting. We launched our Tech Talent Matrix this past September to give customers their first-ever insight into the effectiveness of their technical recruiting efforts,” said Gaurav Verma, vice president of customer success at HackerRank. “Today, we’re going one step further in our commitment to helping businesses make smarter decisions around technical hiring. The Test Health Dashboard gives recruiters and hiring managers real-time analytics around each role, equipping them with the data to better attract, evaluate, and hire the talent they need.”

According to the team, Rust 1.33 features two major improvements. It added new capabilities to const fn, such as irrefutable destructuring patterns, let bindings, expression statements, and assignment and assignment operator expressions. In this release, the pinning concept is now stable. Pins ensure that the “pointee of a pointer type has a stable location in memory,” the Rust team explained.

Flutter 1.2 is now available
Google has announced the first feature update for its mobile UI framework. The team behind Flutter explained that there were three goals in mind with the release of Flutter 1.2: improving stability, performance, and quality of the core framework; polishing visual finish and functionality of existing widgets; and adding new web-based tooling for developing Flutter apps.

New tools included in Flutter 1.2  include a widget inspector, timeline view, source-level debugger, and logging view. In the coming months, the team will work to grow Flutter beyond mobile platforms.

The release adds improvements to stability, especially to Privacy Guard and the su addon. Its Styles API is also now compatible with the default implementation of dark mode in Android, and the team explained that more third party apps will begin to follow that system style too.

Pagedraw shuts down and becomes open source
The UI builder Pagedraw has been shut down and is becoming open-source. The team behind Pagedraw explained that their reasoning for shutting it down is that developers can get 90 percent of the benefits by just using JSX instead.

“We want to give one last, big thank you to all our users, supporters, and investors. It’s been An Incredible Journey. We’re moving on, but We’re very proud of the technology we’ve built. We’re releasing it open source both so you can keep using it, and so we can share our ideas about how to build UI tools,” the Pagedraw team wrote on its website.