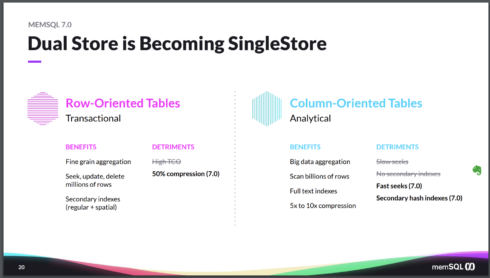 MemSQL 7.0 was announced with an added ‘SingleStore’ enhanced system of record and time-series features to its operational data platform.

“By bringing rowstore and columnstore tables together in a single database, SingleStore eliminates ETL and allows SQL queries to combine data from both types of tables,” MemSQL wrote in a post that described the latest release.

“Now customers, AWS professional services, and systems integrators can use this application to observe KPIs while delivering critical migration, modernization and optimization project—and thus making it even easier to accelerate cloud adoption,” New Relic wrote in a post.

“By enabling SAST at pull requests, the right developer gets the right vulnerability information at the right time. Developers can more efficiently address vulnerabilities in their respective code, improving the overall security of the final build,” the companies wrote in a post.

As part of the partnership, ShiftLeft Inspect will be free to CircleCI users for an unlimited number of applications and frameworks, totaling no more than 200,000 lines of code and 300 scans per year.