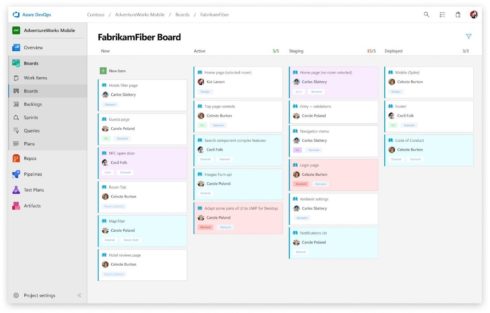 Microsoft is introducing Azure Boards to help users track their work with “drag-and-drop” capabilities right in the browser. Azure Boards enables developers to filter to individual users, export data into calendars, plan sprints and query for their work items.

“Whether you’re a scrum master or someone who’s still brand new to Agile, you’ll benefit from the streamlined interface within Azure Boards to create Kanban boards. You’ll find ideal ways to keep your backlog managed while ensuring that you have swim lanes for important projects,” Jay Gordon, cloud advocate at Microsoft, wrote in a blog post.

Aura Enterprise can manage large datasets, offers End-to-end encryption with built-in VPC isolation plus role-based and node-level access control, and is ACID compliant with a  self-healing architecture delivering a guaranteed 99.95% service uptime, according to Neo4j.

“Aura Enterprise radically speeds time to value, enabling customers to get to production faster than the equivalent on-premises option. Organizations can now focus entirely on building performant, graph-powered applications quickly, without worrying about infrastructure or maintenance,” the team wrote in a post,

The framework has a new domain dedicated to Logging and Monitoring (LOG) as well as modifications in the existing ones including governance, risk and compliance (GRC); auditing and assurance and more.

“CCMv4 provides enterprises with an additional layer of transparency and confidence that their CSPs are following recommended security best practices,” said Daniele Catteddu, the CTO of Cloud Security Alliance.

Later on the show will explain how to use a wide range of AWS solutions including Amazon DynamoDB, Amazon API Gateway, the React library, authentication, Amazon Simple Storage Service (S3), and more.

The solution contains a fully cloud-native, Kubernetes- and container-based architecture, network analytics technology, as well as core-to-edge orchestration which helps with efficient management and the automation of distributed cloud networks.