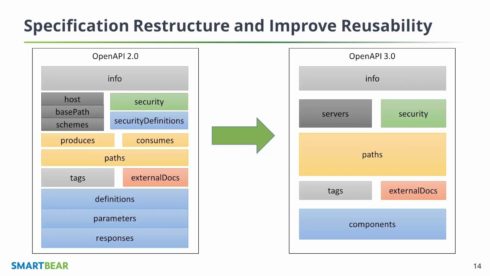 The release of the OpenAPI Specification 3.0.3 brings patches and changes to improve the readability and accuracy of the specification.

Changes include clarification on how Path Templating works, as well as clarifying the meaning of Semantic Versioning, changing hyperlinks from ‘http’ to ‘https,’ and other clarifications.

Apache Samza 1.3.1
Apache Samza 1.3.1 includes many bug fixes such as that Checkpoint dir removal should only search in valid store dirs, Invoke onCheckpoint is only for registered SSPs, the checkpoint and changelog topic auto-creation has been fixed.

Other fixes relate to the coordinator steam creation workflow, heartbeat failure that causes incorrect container shutdown, and the stream processor that should ensure the previous container is stopped during a rebalance.

Racket 7.6
In the new release, DrRacket’s scrolling has been made more responsive, dark mode support has been improved for MacOS and Unix, Racket CS is ready for production use, and the Web Server provides fine-grained control over various aspects of handling client connections.

“Using this new construct, we have decreased the web server’s default level of trust in client connections and made it detect additional, maliciously constructed requests,” Racket wrote in a post.

In addition, The Macro Stepper has a new macro hiding algorithm that tracks term identity through syntax protection.

“When DigitalOcean was first founded, we focused on creating an offering specifically tailored to the needs of an underserved segment of the market – the developer,” DigitalOcean wrote in a blog post. “Over time, as our offerings have expanded, we have broadened our focus to include entrepreneurs and small and mid-sized businesses (SMB), who, like developers, need simple solutions to help them get lift-off on their ideas.”

SentinelOne raises $200 million for its cloud-native endpoint protection platform
SentinelOne announced that it has raised $200 million in Series E funding, elevating the company’s valuation to $1.1 billion.

“The cybersecurity demands of today’s enterprises have evolved, and we’ve taken endpoint protection far beyond what it once was. Instead of solely protecting laptops, desktops, and servers with EPP and EDR capabilities, we protect the entire network edge with flexible, autonomous technology — from containerized workloads in the cloud and data center to IoT devices,” said Tomer Weingarten, CEO and co-founder of SentinelOne.