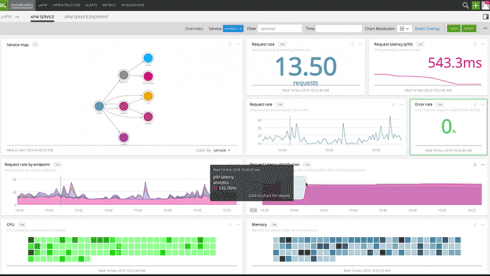 Cloud monitoring company SignalFx has revealed SignalFx Microservices APM, which is a new application performance monitoring solution designed for DevOps teams. The solution is built on top of the company’s streaming analytics platform, giving it access to power data analytics.

“The world happens in real-time and if something goes wrong, finding problems minutes later just doesn’t cut it,” said Karthik Rau, CEO and founder of SignalFx. “Customers expect technology and applications to just work. Their tolerance for failure is next to zero with the value of their brand held in the balance.”

The team also announced plans to ship several releases in the 2.x line that utilize the Dart 2 platform foundation.

According to the company, the solution is a scalable model that replaces traditional testing approaches.

“As I speak to CSOs around the world, they’re looking for better ways to protect their organizations than the traditional pen testing approaches that have not changed in more than 20 years – and have in fact failed to reduce overall security risk,” said Ashish Gupta, CEO of Bugcrowd. “The solution can only be addressed by a radical shift in pen test design, which lends itself exceptionally well to the crowdsourced security model.”

“As software engineers ourselves we understand how critical it is for developers to stay current with the latest software languages and frameworks so we created a learning environment that was designed specifically to meet their unique requirements of learning software languages,” said Fahim ul Haq, co-founder of Educative. “All of the courses featured on the Educative site are designed to be fully interactive, embracing the notion that software developers learn best by doing and continuous feedback. Our platform also makes it easy for authors to create and publish their courses, providing them with an opportunity to share their expertise and generate revenue.”