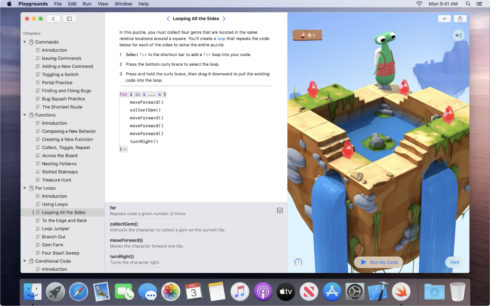 Swift Playgrounds is an app for Mac and iPad that uses interactive puzzles and challenges to help users learn the basics of coding.

Users will use Swift, the programming language created by Apple that is used to build many of today’s most popular apps, according to Apple.

“Swift Playgrounds requires no coding knowledge, so it’s perfect for students just starting out, from twelve to one-hundred-and-twelve,” Apple said in a post that dives into the details of the app.

Microsoft announces developer dual-screen experiences
Microsoft showed its device experience for dual screens, which includes expansive workspaces, focused screens that let developers see an app on one screen and tools on the other, as well as connected apps.

“Your code is important, and our goal is to make going on this journey with us as easy as possible. This starts by maintaining app compatibility and ensuring your existing websites and apps work well on dual-screen devices,” Microsoft wrote in a post.

DevTool improvements in Firefox 73
Firefox 73 has been released with CSS and JavaScript updates, and numerous DevTools improvements.

Firefox said the DevTools engineering work for this release focused on pushing performance forward and that the process of collecting fast-firing requests in the Network panel is a lot more lightweight, which made the UI snappier.

SentryOne Portal is a new UX for managing database performance monitoring
SentryOne Portal provides convenient web access to Microsoft SQL Server and Azure SQL Database monitoring data, so that DBAs, developers, and IT managers can see the status of on-premises or cloud data workloads without an installed client.

In addition, SentryOne now offers three editions of SentryOne Document–Essentials, Standard, and Premium– which will help businesses of varying sizes find DataOps solutions for their environments.