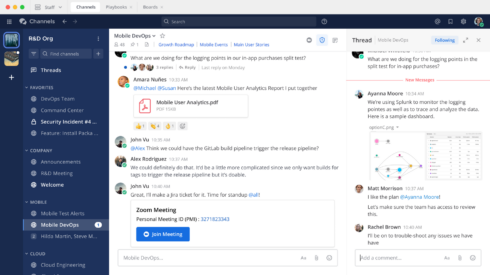 Mattermost is a platform that enables collaboration throughout the software development life cycle.

It offers integrations with several other tools — such as GitHub, Jira, and PagerDuty — so that developers can collaborate without needing to switch between different applications.

According to the Mattermost team, nearly 40% of the work week on average is wasted as a result of tool fragmentation, manual tasks, and fragile workflows. The goal of Mattermost is to align teams, tools, and processes to help regain some of that time.

Channels provide messaging capabilities in both one on one and group capacities, such as voice and video conferencing; file, image, and link sharing; markdown formatting; and a fully searchable message history.

Playbooks are configurable checklists that define repeatable processes. According to the Mattermost team, Playbooks enable development teams to define, streamline and document complex operations that are reoccurring.

Boards provide a Kanban structure for managing projects and tasks. Important items like documents, images, and hyperlinks can be stored in Boards.

Mattermost is written in Go and React and is run as a single Linux binary. A new version is released on the 16th of every month.

It is currently in use at a number of companies, such as Fastly, NASA, Samsung, and DuckDuckGo.