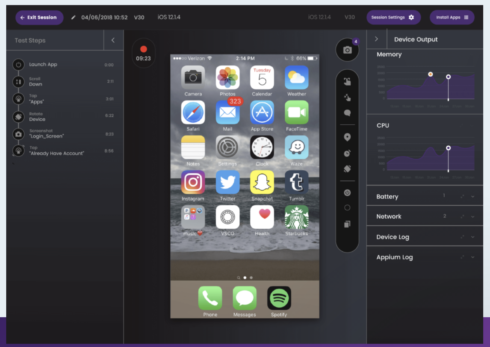 The new version can be used now for testing on Android 11 while the iOS 14 version is in beta pending completion. Another iOS feature is the ability to monitor app performance including session metrics such as RAM usage, CPU performance and network activity.

The new Session Explorer enables users to pinpoint issues instead of pouring through gigabytes of log files.

The extended API provides for more fine-grained control including assignment/removal of a group for a user, user reactivation and user role assignment.

The updated release also brings new intelligent test automation features such as the ability to parameterize data for scriptless tests and to use scriptless automation on private devices. Also, One-Time-Password supports mean that scriptless tests can automate OTPs for both SMS shortcode and non shortcode verification methods.

Users can also now define their own test bundles like “Smoke Test”, “Our Regional Devices” without limitations.

Lastly, Appium selector export enables users to see and export the Appium selector used at any test step during your intelligent test automation session, which is suited for debugging and for including in one’s own Appium scripts.