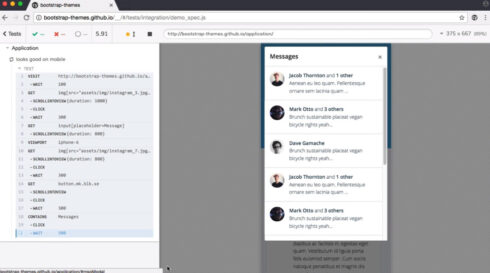 With so many different testing frameworks and tools on the market today, it can be a challenge to determine which is the right fit for you and your organization. Recently, there has been a great deal of talk about Cypress, the open-source end-to-end testing framework for web test automation.

Andrew Knight, developer advocate at Applitools and an avid user of Cypress, said that Cypress is one of his preferred testing frameworks due to the user experience that it offers. “I’ve done a lot of test automation… and Cypress comes in and offers things like a very concise syntax and automatic waiting for elements with a page to protect you from having flaky scripts,” he said.

Cypress has recently received an update, enhancing the features that Knight likes about the tool even more. Cypress Test Runner v9 5.1 has added a “Ready” event to the Plugins process in order to be sure that all of the plugins have started successfully before the configuration is loaded and the tests start.

This update also brings users the ability to create their own custom commands. “When it comes to web test automation, you have a lot of basic and natural things… But, what if you want to do something more complex like log into an application?” Knight said.

He went on to explain that with Cypress custom commands, testers can go beyond base level things and implement more complex commands. “You could say something like ‘Cypress log in’ and you can implement that command within Cypress’ command structure,” he said.

According to Knight, this works to save time and increase a tester’s productivity because they no longer have to type out four or five different commands in order to do a log in or complete other kinds of commands that would normally require multiple steps.

Knight also spoke about the use cases that Cypress is best suited for. He said that the framework is particularly valuable to front-end developers that want to write end-to-end tests as easily as possible within the same workflow as their regular programming.

He went on to say that this sets Cypress apart from other frameworks on the market because it comes more naturally to developers and testers. According to Knight, people who work in front end development and testing tend to shy away from other frameworks while continuing to embrace Cypress because other tools feel older and clunkier in comparison.

“Cypress operates within the browser and it’s entirely in JavaScript, so if you’re already in that JavaScript world you don’t have to go and learn a new language,” he said.