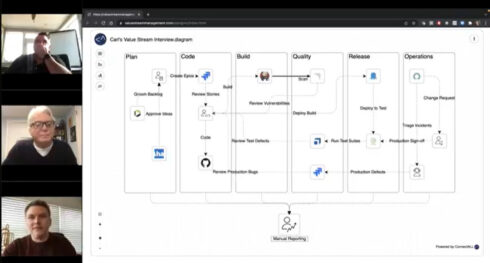 ConnectALL Wednesday gave a sneak peek into its forthcoming Designer tool that visualizes work from idea through delivery and can illuminate areas where waste and non-value work cost organizations time and money.

McGowan worked through an example of what it’s like when they walk customers through their value stream journey with the fictional CIO Carl, who is new to his position and just found out his budget is getting cut so he needs to figure out how to develop software faster.

“Well, their software is not being developed any faster,” McGowan explained. “It’s not getting out the door any faster. And now he’s got to do more work. Or at least at the very minimum, the same amount of work with less resources, right? So he’s got to figure out a way to cut all that waste from his value stream. And so it’s a story that  we’re all familiar with here in software development. How can I do more with less?”

According to McGowan, in order to help Carl, they would first build out a map of all of their processes to uncover the bottlenecks. In this step, they were able to identify that one main bottleneck is that defects get logged in several different tools, so developers have to switch between tools and manually copy and paste information.

“We’d like to pride ourselves as multitaskers, but [at] any time we have to shift context from one scenario or one tool to the next. Even if we’re very familiar with it, it still takes time to  switch over to it,” he said.

Designer can also generate reports with recommendations and impacts so that companies have actionable items to complete to further their value stream management transformation.

ConnectALL will be releasing Designer on Feb. 1 as a free tool to the community at valuestreammangement.com.

To learn more about Designer and actually watch someone be guided through the process, watch the free SD Times Live! talk, “Do you know the secret about how to map your value stream?”

Value Stream Management: The practice that finally unites business and IT