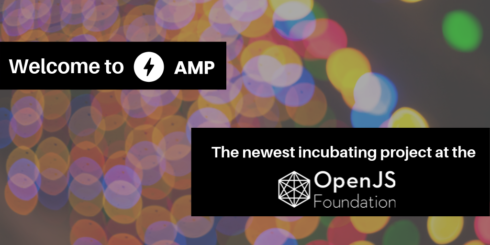 The open-source web component framework AMP now has a new home. At its AMP Contributor Summit 2019, it announced that it would be joining the OpenJS Foundation’s incubator.

AMP is a four-year-old project that was initially backed by Google, and will continue to be supported by Google, who is a platinum member of the OpenJS Foundation. It is used by many organizations to speed up page load time on mobile devices. According to the Foundation, AMP is currently used in over 30 million domains.

“As a Platinum member of the OpenJS Foundation and huge proponent for thriving open-source communities, we are thrilled to see AMP take this step with the Foundation,” said Myles Borins, developer advocate for Google and OpenJS Foundation board vice chairperson.“The opportunity to improve the web is vast, and AMP has a role to play in that. We see no better place for AMP to accomplish these goals than with the OpenJS Foundation.”

AMP began adopting an open governance model in late 2018. At the time, the Technical Steering Committee decided that the project’s next step should be trying to join the OpenJS Foundation. This decision was supported by the Advisory Committee, which is comprised of publishers, CDNs, browser vendors, open web advocates, and e-commerce and platform companies.

“Now in our fourth year, AMP is excited for the next step on our journey,” said Malte Ubl, member of the AMP Project Technical Steering Committee. “We’ve been considering the best home for AMP for some time. We decided on the OpenJS Foundation because we feel it’s the best place for us to help us to cater to our diverse group of constituencies. This step builds on previous moves we’ve made toward open governance and helps us focus on transparency and openness.”