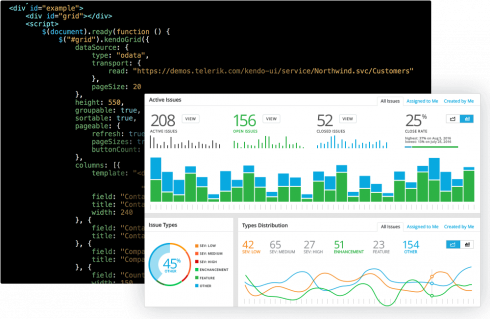 “With the new additions to Telerik tooling in today’s release, developers can now build with full support for the latest Microsoft technologies and new components for Blazor,” said Faris Sweis, SVP and general manager of the developer tooling business at Progress.

The latest innovations for the Telerik product line brings new features, controls and improvements that enable developers to easily build high-performance web, mobile and desktop applications, according to the company

The product offers 17 native UI components including Grids, Charts, TextBox, DropDownList and SASS-based themes. It also includes new mobile support for DateRangePicker and the ability to run the component seamlessly on mobile devices and across all platforms.

In addition, Progress released new components for Kendo UI, the company’s UI toolkit for web development. JQuery, Angular, React and Vue get new features as well as some enhancements for its existing components, according to a post by the company. The full list of Kendo UI enhancements can be viewed here.

For jQuery, Kendo UI is introducing PDF Viewer, which enables users to host PDFs without downloading locally, and a Drawer and Spreadsheet widget.