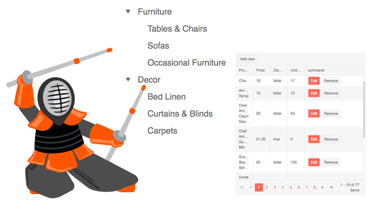 Progress’ Telerik and Kendo UI solutions are getting an update to support the latest web frameworks and design tools. New capabilities include Fluent design, and support for the latest React, Angular, Vue and Xamarin frameworks.

For Progress Kendo UI, new additions to the UI include more native support for React, and more support for Angular with new components such as TreeView, Window, Splitter, and Gauges. In addition, there will be four new vue components added to assist with creating web UI: Pivot Grid, Gantt Chart, Progress Bar, and Splitter.

“It gives developers the choice and flexibility to use a consistent UI layer, all while using the best-suited JavaScript framework for the project, with all the underlying benefits each one of the frameworks brings,” said Faris Sweis, senior vice president and general manager of Developer Tooling at Progress.  “It provides for ultimate adaptivity, so even if a developer needs to switch frameworks, as newer and better frameworks pop up frequently, the familiar Kendo UI does not. Most importantly, the customer-facing UI part of the web app doesn’t need to change in that scenario, causing minimal disruption to the customer if the underlying framework changes.”

The addition of the Fluent theme in Telerik provides a upgraded look to the desktop applications that fit the appearance of the Windows operating system. According to the company, this will be key for .NET developers.

Progress also enhanced the design experience for Xamarin to enable developers to drag and drop comments on the screen faster with five new controls. Telerik Reporting and Telerik Report Server will now provide easier access to more than 30 new data sources, including Salesforce, MongoDB, and Amazon Redshift, according to the company announcement.