How websites did before, during and after the Super Bowl 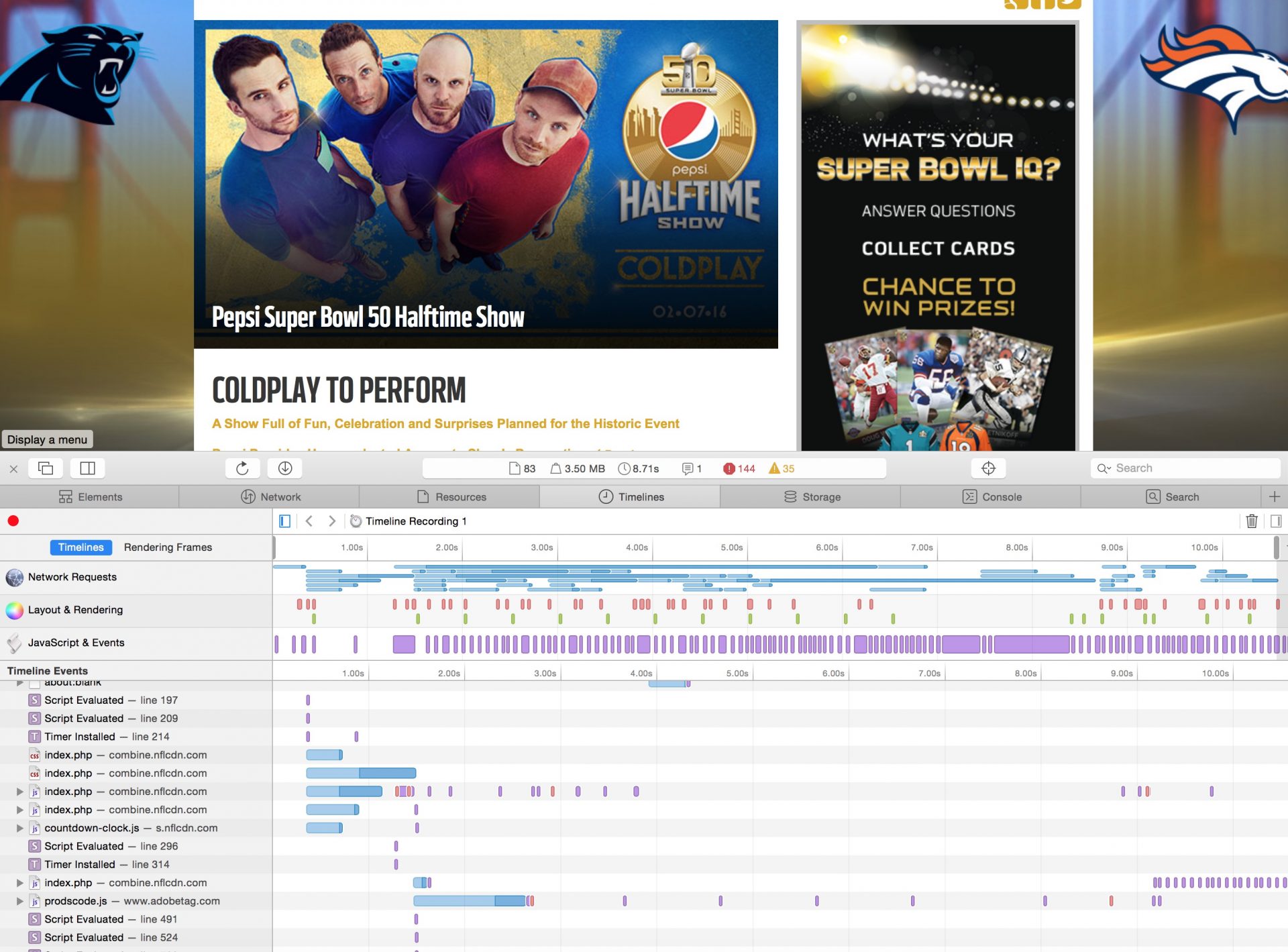 Super Bowl 50 has come to a close, so it’s time for a recap of the big game from a website performance perspective. Did Super Bowl 50 websites and advertisers stand up to the test this year, or were there some major fumbles?

Dynatrace, an application management software company, was monitoring advertisers’ websites leading up to and during the big game. The company looked at the advertisements that were aired during the game to see if they had any impact from a performance standpoint, and if their performance affected their brand. Its results show some major touchdowns and a few drops, but overall, a successful Super Bowl.

David Jones, a field technical evangelist at Dynatrace, said that the company found three advertisers that “absolutely crushed it” this Super Bowl. They were Audi, Heinz and Mobile Strike. The average response time for Audi was 1.527 seconds, Heinz was 1.89 seconds, and Mobile Strike was 2.062 seconds, according to Dynatrace’s live coverage.

“They weren’t just the fastest, but they were consistent throughout the entire game,” said Jones.

(Related: How websites did during Super Bowl XLIX)

When Dynatrace looked at the details of their performance, they saw that the Web teams “clearly” had put some thought and effort into optimizing their sites. He also saw that they were able to handle all of the traffic that was coming to them. Dynatrace found that the Web pages of these advertisers were not complex. They did not use any third parties, social media components, ad networks or analytics tools, and there weren’t many external vendors on their sites. These types of components can bog down a site.

“From that standpoint, they just crushed it,” said Jones.

By looking at the top-performing sites, together they might have had two different hosts that were being called on when their page loaded. Jones compared this to the worst performers, where one advertiser had 93 third parties. Other bottom performers had about 30 third parties on their sites, which meant an average of 30 additional hosts or domains were being called on.

Another strong performer last night was Jack-in-the-Box. Its advertisement for a million-burger giveaway was risky, according to Jones, because it is the kind of offer that tends to generate traffic back to a site. From what Dynatrace saw, even though people swamped the site relatively quickly, it was still able to handle the load.

Jones also had a shoutout to the team at CBS Sports, which hosted the Super Bowl. For a couple of days leading up until gameday, Dynatrace saw some performance issues. The day of the Super Bowl, he said that its websites performed fine even though received elevated traffic levels.

“Their site was a flat line, which is what they wanted to see I’m sure,” said Jones.

Not everyone can be a winner
During the game, Jones said there were a few companies that had some “fumbles.” In almost every case, even if they fumbled for a few minutes, they were back up and running in a short order. These companies included Bai, Death Wish Coffee, Intuit, Marmot and Mini. When their advertisements aired, there was a tremendous spike in traffic, according to Jones. Though they stumbled for a few minutes, they were able to get back up and running smoothly.

Another fumble came not from an advertiser but from a halftime performer: Beyonce.com. Although Dynatrace did not monitor Beyoncé’s site, it heard from others that the website suffered problems after the halftime show was over. It didn’t really recover until around 3 a.m. EST.

Jones said that for someone like Beyoncé, having a website with performance issues during a time like the Super Bowl isn’t necessarily going to lose her money. However, he said that her website being down “absolutely” damaged her brand.

The Puppy Bowl also experienced an outage. Around 5:30 p.m., Jones said there was a small issue with its site, but it was resolved fairly quickly.

For advertisers who might have briefly dropped the ball or who are hoping to perform better next year, Jones had some tips from the top performers. He said that it’s important to keep in mind that just because these websites performed well doesn’t mean they “dumped tens of millions of dollars into service infrastructure.” He thinks that it was a deliberate, well-planned and well thought out execution on the advertisers’ parts, who made sure their sites were well-optimized and had reduced page weight, third parties, and application complexity.

Overall, Jones saw a sense of advertisement maturity, and from a delivery standpoint, most websites successfully avoided long-term outages.

A full play-by-play of the Super Bowl performance is available on Dynatrace’s blog.