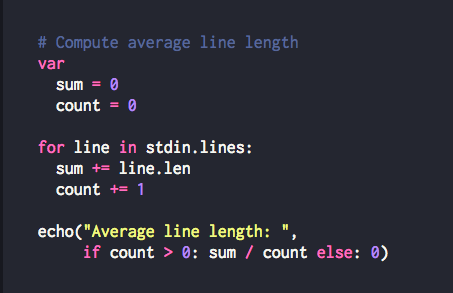 The Nim Team has announced the latest release of Nim, version 0.18.0. Nim is a systems programming language that focuses on performance, portability, and expressiveness. New features of the release include formatted string literals, testable documentation examples, mapLiterals and new memory manager algorithm.

“We have mentioned multiple times that this will be a major release. Primarily because our goal has been to clean up the standard library significantly in preparation for v1.0. We’ve made massive progress in this release to achieve that goal. The downside is that this release has a much larger proportion of breaking changes than normal releases, but it is all in the spirit of a cleaner Nim v1.0,” the team wrote in a post.

“AI can solve complex problems and has the potential to transform entire industries, which means it’s crucial that AI reflect a diverse range of human perspectives and needs,” said Zuri Kemp, from the Google AI team, in a blog post. “That’s why part of Google AI’s mission is to help anyone interested in machine learning succeeding—from researchers, to developers and companies, to students.”

Bugcrowd round of funding
Bugcrowd has closed a $26 million Series C round of funding led by Triangle Peek Partners. The company’s goal is to equip organizations with a more customized security testing program in order to bolster their security posture.

“The dearth of cybersecurity defenders within organizations and the shortcomings of status quo security approaches is increasingly being addressed by crowdsourced security testing as it cost effectively brings the creativity of the crowd to outsmart adversaries,” said Ashish Gupta, CEO of Bugcrowd. “We intend to use the new funding to accelerate our go-to-market scale and platform advantage.”

Rust 1.24.1
Rust has announced a new version of Rust, 1.24.1. Rust is a systems programming language that focuses on safety, speed, and concurrency. The enhancements include minimizing undefined behavior, simplifying the bug in windows, the error index generator works again, and cargo will warn on Windows 7 if updates are needed.