The trio of new AWS code tools is made up of AWS CodeDeploy, AWS CodeCommit and AWS CodePipeline. Here’s a breakdown of what each of the new code-management and deployment tools can do:
• AWS CodeDeploy: Deploys released code to what Amazon describes as a “fleet” of EC2 instances, ranging in size from one to as many as tens of thousands of instances. Designed to deploy code at scale, the tool automatically schedules updates across multiple time zones without downtime, and can be managed from the AWS Management Console, command-line interface or through AWS APIs.
• AWS CodeCommit: A managed revision-control service that hosts Git repositories and works with all Git-based tools. A developer or administrator can create a CodeCommit repository and assign permissions through the CodeCommit Console, and the tool will store the code, binaries, and metadata with redundancy in the AWS cloud, enabling developers to edit, compare, sync and revise code remotely.
• AWS CodePipeline: A modeling and automation service for the software release process. CodePipeline helps to design development workflows and facilitate code through the staging, testing, and release process. The self-contained, end-to-end solution works with third-party tools and through the CodePipeline Console. Customers can use serial and parallel actions to construct graphical models and monitor source code.

AWS CodeDeploy is available today for AWS customers, while AWS CodeCommit and AWS CodePipeline are set for launch in the near future. More details about all three code tools is available in this blog post from AWS chief evangelist Jeff Barr.

Aurora is a MySQL-compatible database for the Amazon Relational Database Service (RDS). Amazon RDS is a service for operating and scaling a cloud-based MySQL database, and Aurora is designed to combine the speed and availability of commercial databases with the simplicity and cost-effectiveness of open-source databases, according to a blog post from Barr. 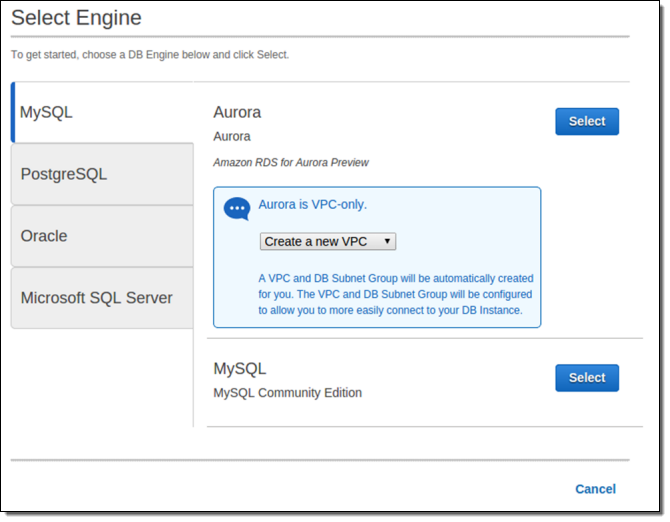 A preview of Amazon Aurora

According to Amazon, the Aurora MySQL database engine adds storage in 10GB increments or on an as-needed basis with a maximum storage capacity of 64TB. It scales linearly as more data is added, with high burst rate options. Aurora data is backed up to Amazon S3, and according to Barr the RDS console has also been upgraded with additional instance information and monitoring options.

Amazon Aurora is now available as a preview in the AWS US East Region for users to migrate their existing RDS for MySQL database to Aurora.

Best of the rest at AWS re:Invent
Amazon Aurora and the new AWS code tools were the most prominent announcements at the conference, but Amazon rolled out several other new products and services, and previewed others coming down the pipe:
• AWS Service Catalog: An AWS service targeted at enterprise IT departments to deliver AWS services to internal users while maintaining control. The service catalog has different UIs for administrators and users within a single AWS account. The administrator maintains the portfolio of products in the service catalog, with users browsing the selection of AWS instances, servers, databases and tools through a separate portal. The AWS service catalog is set for launch in the near future, and more details can be found here.
• AWS Config: A new service to monitor and analyze the initial state of AWS resources and track creations, deletions and property changes. Available in the AWS Management Console, AWS Config gives users visibility into the history and changes over time of their AWS instances. Barr explained more about AWS Config in this blog post.
• AWS Key Management Services (KMS): AWS KMS gives users centralized control over AWS encryption keys. According to another blog post from Barr, the key-management service protects data when implementing key management at enterprise scale by never storing keys on disk or persisting them in memory while limiting device-control systems. AWS KMS can be managed in the AWS Management Console, and other AWS services, including S3, EBS and Redshift, now have the option to encrypt data with KMS.