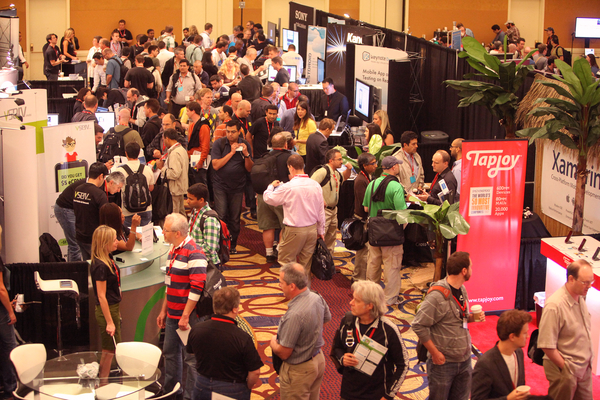 In an exposition that was more reminiscent of early PC conferences than a developer event, the Android Developer Conference showed off numerous innovative products. For developers, tools on display offered new ways to monetize, test and monitor apps. Hardware makers were also on hand to offer help for designers working on-next generation devices and applications.

For instance, Appfour showed off AIDE, the Android IDE, during the show. This development environment runs on Android devices, and supports languages like C, C++ and Java.

For applications that need testing, Intertek discussed its testing options with attendees. The company offers a worldwide network of testers for developers to use. Applause, formerly uTest, offers a much more crowdsourced option for developers with thousands of freelance testers on tap for real-world testing scenarios, such as testing applications on moving trains.

Qualcomm offered developers a host of boards and chips to play with at the show. The company’s next-generation Snapdragon 805 processor offers high-end capabilities that bring mobile devices on par with desktops. Qualcomm offers development kits for building with the 805 now.

For developers looking for even more power, the 8-core ARM chips on AppliedMicro’s APM883208-X1 X-Gene X-C1 Evaluation Kit includes everything you need to build with Android on your desktop. The board and chip can be expanded like a desktop PC, and even includes Ethernet, USB and PCI Express.

Developers concerned with their life cycles and processes were able to chat with Golgi about its mobile cloud service. The company offers cloud-based access to popular suites from IBM and Microsoft, meaning developers can build mobile applications that tie into enterprise applications without having to install on premise.

SmartBear showed off its process and life-cycle solutions, such as TestComplete, which offers testing capabilities for HTML5, Flash, Flex and even Silverlight.

Electric Cloud’s Ship.io was on display at the conference as well. Ship.io eliminates a lot of the environmental configuration issues developers face during testing, and it offers a way to build applications across multiple platforms. Ship.io recently added Gradle support, which was demonstrated at the show.

Couchbase showed developers how to build resilient, document-driven applications with Couchbase as a back-end data store. Intel demonstrated its new INDE development suite, which gives developers access to Intel’s top development tools, while targeting deployment to Android and the Web.

For developers looking to make more money, Braintree was showing off its scalable, full-stack mobile payment platform. Developers can use Braintree to embed the payment options they need into their applications, whether by PayPal, Apple Pay or other services.

Millennial Media showed off its advertising products, which give developers a lot of options when it comes to targeting the right ads with their application. For developers tired of the old ad models, Pollfish demonstrated a new way to make money on mobile applications. It allows developers to embed paid-for surveys into their applications, and to get paid when their users complete them.

Ellisys is preparing for the Internet of things with its lineup of Bluetooth sniffers. These products allow developers to see what’s being passed over the air via Bluetooth, and helps them track down problems with the wireless communication protocol. New at the show, however, was Ellisys’ multifunction USB 3.1 and PD Protocol Test Platform, which can help developers prepare for the new higher-power USB standard.

Dolby showed off it digital signal-processing tools at the show. Using the Dolby SDK, mobile developers can vastly improve the audio quality of their applications through software that essentially takes over the equalization knobs.

High Resolution Technologies showed off its digital signal processor add-ons for Android. These devices plug into Android phones and tablets via USB, and take over all the sound processing for the device, improving audio quality and amplifying headphone output.

Sony showed off its newest SDKs for its Android devices, and Epson demonstrated its wearable Moverio glasses, which run Android and offer an overlay of information onto the world for the user.

DisplayLink showed off its new device, which turns an Android device into a desktop computer. Using a USB breakout box, the user can add DVI, USB, Ethernet and other ports to their tablets and phone simply by docking them with the DisplayLink system.

Thales was on hand to invite developers to bring their applications into the Thales on-board entertainment systems for airplanes. Atalogix was also on hand to offer Android consulting services.

Newcomer ooVoo demonstrated its SDK, which allows developers to embed voice messaging, audio communication, and multi-party voice capabilities into their Android applications. Mantis Vision showed its MV4D depth-sensing system, which takes advantage of two phone-mounted cameras to measure the depth of objects in its field of view.

Finally, Honda was on-hand to bring developers into the fold of its new software group. Honda is preparing to build out its support for the Android Automotive SDK, and as such, has realized that testing such software is troublesome for developers. To this end, it has opened a development lab in the Silicon Valley where developers can bring their applications to test them on a real car with Android connectivity.